Good news about British melodic rockers Magnum. They are working on their new CD which will be their 18th studio record. The album will be called "Escape from the shadow garden" and will be released beginning of 2014.

Tonight on Germen TV: Rockpalast broadcasts a first summary of the Rockhard Festival 2013. it will contain the highlights of Queensryche, D-A-D, Naglfar,...

Kreator will release their new Live DVD "Dying alive" on August 30. The show was recorded on 22.12.12 in the sold-out Turbinenhalle in Oberhausen (Germany). The show was part of the "Phantom Antichrist" tour. The DVD/Blu-Ray includes the show, some 'behind-the-scenes' material as well as video clips. The length will be around 115 min. Check out the first trailer. Swedens The Haunted are back in business. After almost yaer they announce the new line-up:

"THE HAUNTED went through some difficult times last year. Losing three band members is a pretty huge blow to any band. Jonas and I agreed immediately that we wanted to continue with the band, but we wanted to take our time and not rush into anything. Meanwhile, news from THE HAUNTED's camp have been pretty scarce. This changes starting today. We are very happy to be able to present you a full band line-up. Some of you might recognize a few faces, some of you might not. Adrian Erlandsson is back on drums and Marco Aro is back on vocals. Adrian you might know from playing on our first album and Marco sang on "The Haunted Made Me Do It", "Live Rounds In Tokyo" and "One Kill Wonder". On guitar we also have Ola Englund bringing some pretty heavy chops to the band.

We're all VERY excited about having THE HAUNTED back in working shape again and we can't wait to get back out on the road to play for our very patient and faithful fans again. A new album is also already in the works and if you are familiar with the individual band members of this new line-up, you can be assured that the new material will grab you by the throat from the get-go!

A huge 'thanks' goes out to all the people that responded to our call for new members applications. You put a lot of time and effort into your auditions and we are very grateful to have had such talented and cool people wanting to join the band! We truly appreciated your support!"

Swedens Evocation will release a new EP in August this year. It will be a five track EP with cover versions.

3. You suffer (original by Napalm Death)

4. Enigma (original by Edge Of Sanity)

5. Terminal spirit disease (original by At The Gates)

The EP was recorded in the band owned Evocation Studios and was mixed by Dan Swano.

After he released some milestones albums with Exodus Steve 'Zetro' Souza almost disappeared from the metal scene. After joining Tenet for a while he is now starting through with the new band called Hatriot, which is almost a family business, since also his two sons play in the band. The debut album is called "Heroes of origin" and is real thrash metal from the Bay Area.

Already the superb opener "Suicide run" convinces with a lot of power. It is great to hear Zetro's typical and unique voice again. I think that we missed it for too long. Kosta and Migual play great riffs. Especially Kosta, who was responsible for all the music on the album, does a fantastic job. Of course they aren't the famous Exodus duo, but the are really good and very close to them. The entire album doesn't give you any moment to lay back and relax. All songs are also built on a tight and fast playing rhythm section, which is consisting out of Cody and Nick, the sons of Zetro. Songs like "Weapons of class destruction", Globicidal" and also the title track are great songs. They sound mean, dirty and threatening. "And your children to be damned" comes with a great mid-tempo mosh part in the middle. Well done. "Shadow of the buried" takes out the speed in some parts in the beginning develops to a straight thrasher before it also takes down the speed in the end.

"Heroes of origin" is revitalizing the old Bay Area sound and is to recommend to all thrash metal fans. This album is definitely a thrash highlight of the year 2013 and I hope we can see them soon in Europe on stage. Imagine a tour of Testament together with Hatriot....

5. The violent time of my dark passenger

7. And your children to be damned

9. Shadows of the buried I have seen Saxon now two times within the last 6 month and they had two great shows in Holland. In Novemer 2012 they played a kind of best of show in the Patronaat in Haarlem. Then they came back in May with the new album called "Sacrifice". The album is a really strong one (the title track was already performed in November) and the live show was even better.

The Boerderij in Zoetermeer is actually a nice venue a little bit outside of Den Haag. The location was almost sold out and Saxon started their show on time. The focus was with six songs on the new CD. But of course combined with classics like "747" and even "Ride like the wind", which they don't play that often live. „Conquistador“ was also including a drum solo from Nigel Glockler. The band played very tight and Biff’s voice was great. The had a perfect sound and the audience reacted entuthiastic. It was a big rock’n’roll party. After 2 hours the started their final song „Princess of the night“ – one of the real classics.

After 37 years in business Saxon doesn't seem to become older, they just get better. If they continue in such a good shape we still can expect a lot of them in the future. If they are around in your town, go there and see them live.

3. Power and the glory

8. Night of the wolf

11. Guardians of the tomb

21. Princess of the night 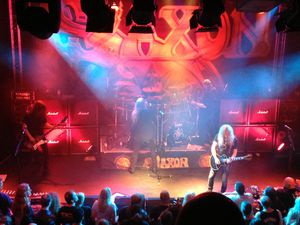 How is it going with Lemmy from Motorhead? German news magazin n-tv says that Lemmy is in hospital. Some planned shows were cancelled during the last days, even the festival show at the "With Full Force" festival. In March it was announced that Lemmy actually got a defibrillator for his heart since heart problems were found at Lemmy.

Now Lemmy had to go to the hospital again with some serious hematoma. Let's hope that it is not too serious and that he feels better very soon.

Victor Smolski talks about coordinating the two orchestras during the recording of the new LMO album. An interview with Zetro will be soon in this Blog. If you have questions I should ask him please let me know.

Lingua Mortis Orchestra is a project which combines Heavy Metal with Classical music. The project is mainly driven by German heavy metal band Rage, who works together with classical orchestras from Spain and Belarus.

The new album of Lingua Mortis Orchestra will be released on August 2 via Nuclear Blast Records - one day before their show at the Wacken Open Air. The album will be simply titled "LMO". Most parts are composed by Victor Smolski who also produced the album together with Charlie Bauerfeind (Blind Guardian, Hammerfall). The story of the album is about a true story of witch-hunting in the 16th century.

a) Convert The Pagans PT. 1

b) The Inquisition (Instrumental) Swedish death metal band Hypocrisy will re-release their albums "Penetralia" from 1992 and Osculum obscenum" from 1993 in a remastered version. The release date will be July 12. 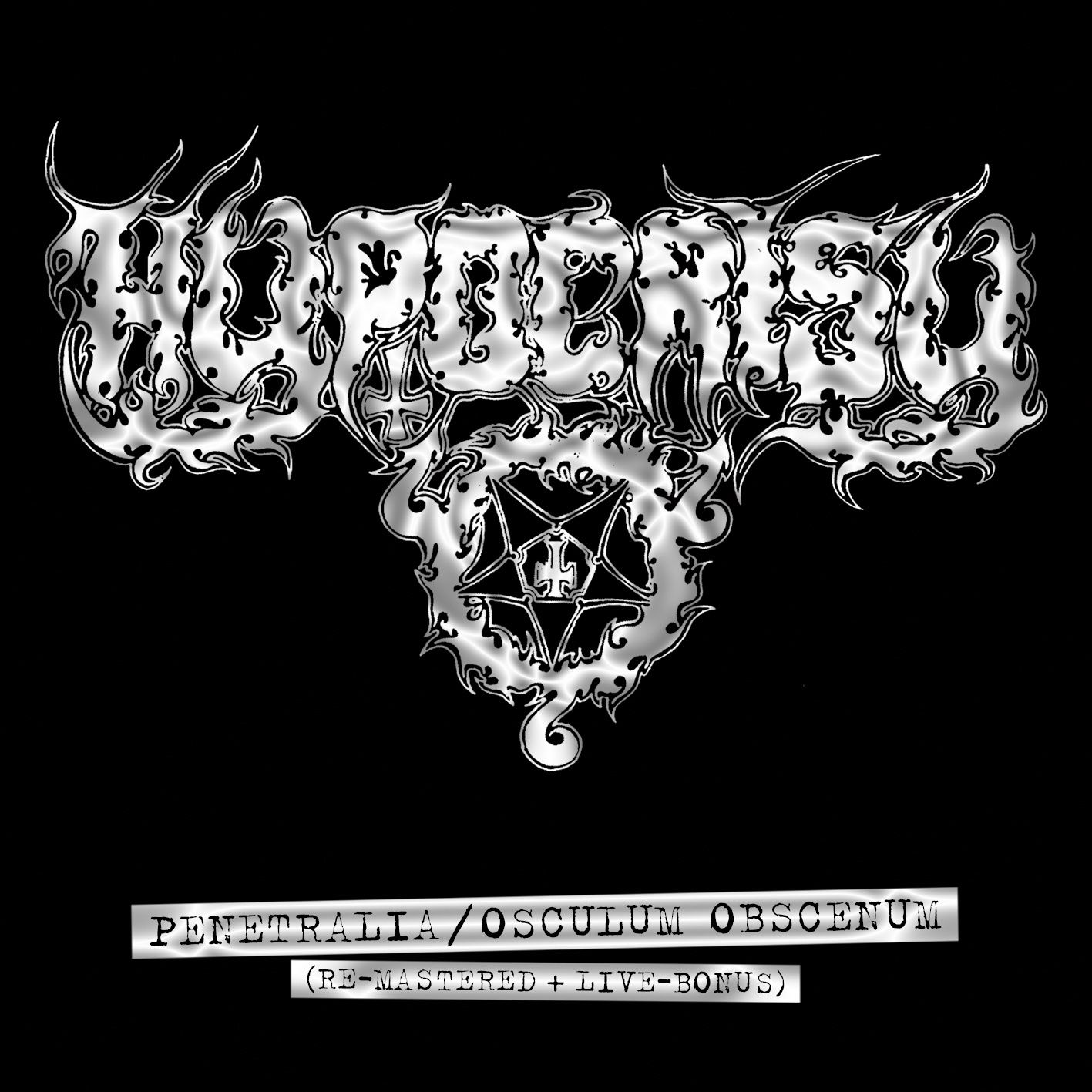 After playing a few shows in the last years Carcass will release their new album on Friday September 13th via Nuclear Blast. The title of the album, which will be mixed by Andy Sneap, is not known yet. The band will be on tour in autumn 2013 together with Amon Amarth. Alex Skolnick (lead guitar Testament) put the leather jacket he has worn on the TSO tour in 2005 on ebay. The money will go to the Jason Becker Special Needs Trust and ALS Therapy Development Insititute. The auction is for one week. Great initiative.

ID Wear jacket - Black Denim Size M Worn by Alex Skolnick while on tour with Trans-Siberian Orchestra 2005Alex stated about donating the jacket to auction off for the Jason Becker "Not Dead Yet" ...