I have been a few times to the legendary 013 in Tilburg, but I haven't seen the venue since they finalized the renovation works. Actually it was more a rebuild than a renovation. The result is impressive. The acoustic was always great but I have the feeling it became even better in the new setup.

Tonight it was Gamma Ray that had a stop in Brabant. The guys filled the air of the Jupiler Zaal, which is the smaller of the two halls, with their metal.

But before the guys from Hamburg started their show it has been up to two support bands warming up the crowd.

Neonfly from London made the start. Their 30 minutes long set was the right thing to gett into this metal night. Power metal, that is what the guys play and they did a quite energetic show. Things that stood out have been the excellent singer Willy Norton that was, next to his good singing, also a great entertainer. He did everything to brings the fans up to temperature. Next to him it was six stringer Fredrick Thunder; a guy that is a good guitarist but the focus went more on his Inca-like feather outfit. In the beginning it was just a few of them around his arm. It became more during the show and ended up in a feather headdress at the end.

After such a start it was up to Serious Black to bring even more energy into the crowd. It has been already many fans in front of the stage when the multinational five-piece started their show, something that shows that the guys are well-known even with one album released yet. Serious Black played their show without any gimmicks which was a clear contrast to Neonfly - and they haven't had a need for decoration. Their powerful metal is good enough to convince. Dominik Sebastian and band mates set down a cool show with great metal posing. Their melodic metal fitted perfect the songs of the headliner. Mostly taken from the bands debut the show had also some instrumental parts that included a jam session with a few notes of "Rock you like a hurricane" and " I Was Made For Loving You" as the cherry on the pie. All in all a solid metal twister that went through the 013 for 45 minutes. Good stuff. 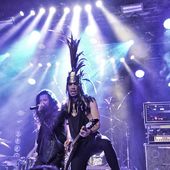 Having metioned the Scorpions: they became 40 this year. Gamma Ray isn't that long in business but there was still something to celebrate. It was the bands 25th anniversary which means a quater of a century of cool melodic power metal from Northern Germany. That's very much worth for having a party.

I think that Gamma Ray and esp. creator Kai Hansen reflect the Hansestadt very well. If you have ever been to Altona, St.Pauli and Sternschanze you get a feeling for the city at the Alster. This town is creative, grounded, open-minded and honest. Gamma Ray stands for all this too.

The band loved to play live; something that was obvious every minute. The guys didn't get detached from reality after having been so successful of the last 2,5 decades. They stand with both feet on the ground. Again, they love playing metal and not for nothing the guys performed almost two hours.

Creativity and openess comes back in each of the tunes, incl. a reggae part embedded in "I Want Out".

Something I was curious about was how the band intergrated their new singer Frank Beck. I can conclude: all good. Hansen took the lead vocals in the beginning of the set before he introduced the new kid in town.

Beck did an excellent job. Two years ago the guy stood as a fan in the audience and now he his with Hansen & Co. on stage and you could feel that he fits perfect into the group. And that his voice goes together with the one from Hansen is what the guys proved during the entire show.

Kai Hansen is the mainman and the brain of the band. Therefore he deserves some spotlight. But he is also giving enough space to his band mates. Michael Ehré did a cool drum solo followed by a bass performance by Dirk Schlächter. That Henjo Richter got also his moments on second guitar goes without saying. Gamma Ray is one of the most influential German power metal acts. The last records made this very clear and the gig in Tilburg showed very well why the guys are in business for such a long time.

I think that everybody who watched this show was highly satisfied. The fans went wild during the show; clapping, singing and headbanging.

This evening was pure metal and hopefully we will get another 25 years of metal from the Hanseatic rockers. 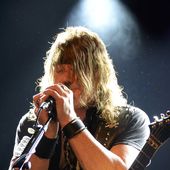