(*/10) Swedish rock powerhouse Imperial State Electric released a few really good studio albums of which the excellent "All Through the Night" was the latest one that hit the record stores. With these great records in their backpack it's a given that live shows also evolved to awesome rock events, full of energy, spirit and sweat.

What was missing in Imperial State Electric's discography was a live album. 2018 is the year that closes the gap with "Anywhere Loud". Nicke Andersson and his gang put together a comprehensive tracklist that represents the band creative achievements more than well. In addition to the well-done choice of songs the longplayer transports the energy of an Imperial State Electric show in a best possible way even though live shows are even more intense than what you get with "Anywhere Loud".

Base for this album has been sold-out live shows in Madrid, Stockholm and Tokyo, concerts the quartet performed during 2014 and 2016. It was Ola Ersfjord who gave the album the right touch when it comes to sound and production, which makes classics like "Reptile Brain" and "All Over My head" to exciting moments in rock.

As a kind of 'extra' Imperial State Electric fans get two cover versions that made it on the setlists and on this release. Dead Boy's "Sonic Reducer" (yes, it's not from Overkill, who covered this anthem in an excellent fashion) and "This is Rock'n'Roll" from The Kids.

"Anywhere Loud" - nomen et omen. This album needs to be listened with the volume on 10. Imperial State Electric captured the art of rock'n'roll on a terrific live album that can be only topped by a live show in a smaller club. (8/10) Deadheads, hailing from Gothenburg, worked on their crucial third longplayer entitled “This One Goes to 11”. The result of all this work and effort can be listened to end of January.

After the highly acclaimed first two records ,Deadheads pick it up where they ended with “Loaded”. Inspired by bands like The Hellacopters and Gluecifer the quartet celebrates the beauty of hardrock on their newest accomplishment.

The entry point to this longplayer is fast and dirty. “Black out” is an uptempo rock’n’roller without any frills. It’s a song that doesn’t take any prisoners and is spot-on.

Deadheads reduce their pace slightly with “Don’t Mind the Ghost” before the grooving “Somebody Along the Way” fires again on all cylinders.

In case you don’t like Mondays you should check-out “Manic Mondays”. This song is a true wake-up call that shakes you up. After all these powerful tunes it’s time for some recovery. “Too Lost to be Found” is the soundtrack for chilling out. Kept in a moderate pace the tune is a classic rock corner piece on the album that fits very well into the flow and it’s with 5 minutes also the longest track on the album.

The second half of the disc starts with the unpolished “The Plan” before Deadheads go ahead with a raw rocker entitled “Instant Control”. One of the best tunes on this record is “2 Steps Before the Fall”. The melody, the riff and the pushing rhythm section of this vintage rocker adds a lot of excitement to the song and the record.

“This One Goes to 11” means eleven song and we reach the last quarter of this crispy release. “Lucifer” and “My Time” keep up the high level of quality before “Status Low” acts as a strong bouncer.

This longplayer is a pleasure for fans of dirty rock’n’roll. Deadheads don’t care that much about trends. These guys solely follow their heart and passion for excellent music done with a down-to-earth approach and a kick-ass attitude. (9/10) One of the most exciting records I’ve heard over the last years came from Finland and it was Svart Records who enabled Jess And The Ancient Ones to make their songs accessible for a wider group of rock fans all over the planet.

The band got together in 2010 when Thomas Corpse and Thomas Fiend went to the starting block with a new rock band. 24 months after their start, Jess And The Ancient Ones released their debut, followed by the outstanding “Second Psychedelic Coming: The Aquarius Tapes”. The sophomore album got a lot of excellent feedback from fans and media, a fact that hopefully didn’t put too much pressure on the band member's shoulders.

Having listened a few times to “The Horse and Other Weird Tales” fortunately proves that the quintet could keep their ease. Nine new tunes stand for a great continuation of the band’s successful history to date. Like with the earlier records it’s the vocal by Jess that are a crucial ingredient for the entire sound. Regardless if it’s the louder screams in “Return to Hallucination” or the calmer notes in “You and Eyes”, this grooving, dark, occult and rocking music finds its way into your heart and soul.

None of the nine songs on “The Horse and Other Weird Tales” is a filler. Each of them is a shorter or longer, in any case well thought through, rock songs with a psychedelic touch. This album is delight for fans of warm and organic rock music, a sound that manifests itself in each tone played. This album has definitely a wow-factor and I can recommend it with a 100%. (*/10) A band that belongs to the Champions League of the current retro rock peak is Blues Pills, hailing from Sweden. Having only two longplayers out there in the record stores up till now doesn’t mean that the quartet isn’t present. in contrary. Blues Pills is a band that love to be on the road and play live in front of fans of good rock music.

Blues Pills that belongs to the rising stars when it comes to classic rock music that’s built on the bluesy rock roots of the 70’s. What happened over the last years sounds almost like a dream that became true, probably not even expected by the band themselves. The sophomore longplayer “Lady in Gold”, released last year, went right into the charts, leading to a number one position in the German longplayer charts.

To promote this fantastic album the band embarked on a longer tour and one of the shows of this journey took place in Paris on October 30th last year. Much to the joy of every Blues Pills fan the show was recorded. In front of 1,200 enthusiastic fans the quartet celebrated blues and rock music in a perfect fashion. The band turned Le Trianon into a madhouse by igniting a pure rock’n’roll vibe. Blues Pills, live and on studio releases, stands for the basics of rock music. There’s no need for unnecessary decoration and any frills would be a distraction of the musical spirit that's embedded in each of the tunes.

“Lady in Gold – Live in Paris” captures all the highlights of this exciting rock outfit. If you haven’t heard anything of Blues Pills before it’s this longplayer (and DVD) that gives you an excellent overview about what was created so far by this terrific four-piece band. Fans of the band will love this live release anyhow and in case you're looking for moments that give you the shivers I can recommend “I Felt a Change” with Elin and her awesome voice being literally in the spotlight. (8/10) Since 1992 the classic rock outlet of Arch Enemy guitar player Michael Amott is called Spiritual Beggars. Without having reached the same status as Arch Enemy, this quintet isn't a bunch of rookies starting up something.

Next to Amott also guys like Ludwig Witt (Grand Magus) and Per Wiberg (Kamchatka) are part of the band since many years, a team that got completed by Sharlee D'Angelo on bass and singer Apollo Papathanasio.

As we speak the guys release the curiously awaited new longplayer "Sunrise to Sundown" which is already the eighth chapter in the story of Spiritual Beggars.

In case you liked the former releases of the Swedes you will also appreciate what the guys burnt on this new disc. It's a logical continuation of Spiritual Beggars classic rock, enriched by some stoner rock as in songs like "Lonely Freedom". The whole album is rockin' pretty well and it comes with a cool vibe, something that just gives you a good time.

Connected to all this is the hammond organ that provides a warm and organic sound foundation. "Diamond Under Pressure" is a vintage style rocker that feels like a journey back to the 70's, almost a tribute to the legendary Jon Lord. But the song has more to offer. Apollo Papathanasio does a an excellent job behind the microphone and "Diamond Under Pressure" states pretty well what he can do with his voice.

A song you should have heard is "No Man's Land". It's a bluesy hardrocker that combines the bigger moments of Whitesnake with some Rainbow allusions. But what really stands out is the center part. Spiritual Beggars unveils the piano and together with the singing guitar the whole things reminds of Queen in their later days.

These more bombastic tunes need a counterpart and the puristic "You've Been Fooled" is one of those. The band exclude all decoration, something that results in a dirty classic rock track that is highly entertaining.

Spiritual Beggars used the time between 'sunrise and sundown' to create an album that combines musical craftmenship skill with passion and rock'n'roll. Thumbs up. 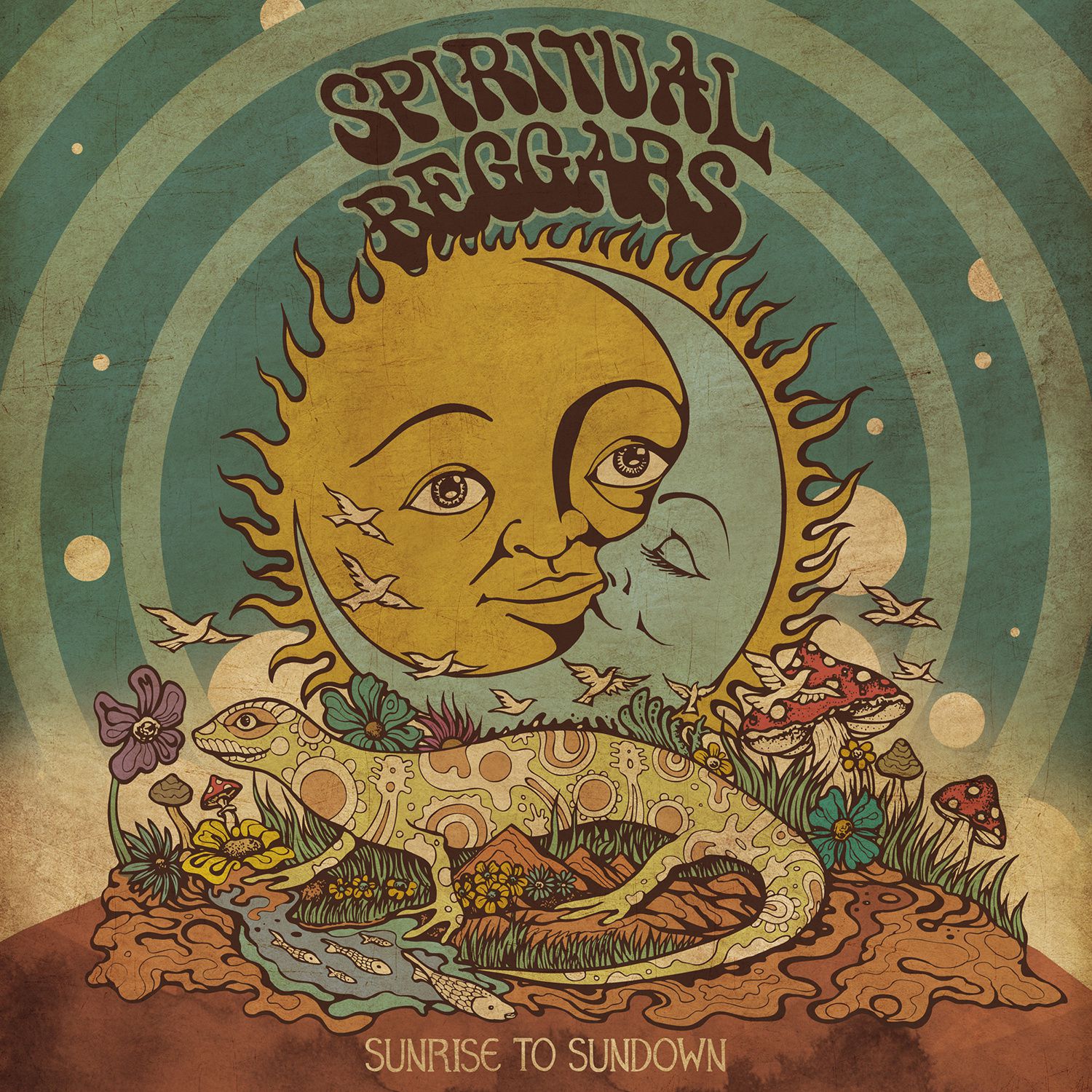