These are the German dates. For all dates check-out www.trivium.org

(5/10) New stuff from Trivium. Wow. Cool. Let's press 'start' and see what "Silence In The Snow" can do for us. The first sonic signals are named "Snowfall" which is a cineastic intro into the album. OK. The title track is the first real song and it becomes obvious already at this stage that Trivium isn't thrash anymore and it's not metalcore either. The four-piece developed their sound towards melodic power metal. On "Vengeance Falls" the four guys combined the melodic approach with a harsh heaviness. On the new longplayer the focus goes on the first one and the second part is almost gone entirely.

"Silence in The Snow", the song, has a very melodic touch, clean vocals and a metallic riff. But it's also far away from the bands raging debut days. Trivium wrote this track already back in 2007 but at that time they had the idea that it doesn't fit to their sound. Eight years later it became the title track - what a move.

"Blind Leading the Blind" takes the same road and I had to check twice if I still listen to Trivium; the band that blew me away with "Ascendancy". "Dead and Gone" has a good solo but is in the end an average melodic rock song that is done by many others in a better way.

Things get a bit more exciting with "The Ghost That's Haunting You" before "Pull Me From The void" is another ordinary song. The label info talks about 'development'. At least the band changes their sound but I don't know if this is something everybody was waiting for. From time to time a crunchy riff shows up at "Pull Me From The Void" before the melodic alternative metal track "Until The World Goes Cold" let you freeze again.

I could continue with the rest of the songs, but since they follow the same pattern I will not do this. On exception though. "Breathe In The Flame" is a spark that enlights the metal heart. It's the hardest track on the album and partky bring back the good ol'days.

I followed the band from the very beginning and the more melodic orientation became clearer during the latest records. But this album goes one step too far, at least for my taste. And here comes another new video. The thrashers of Trivium published with "Leading the blind' a new song as video. It's an highly entertaining one and here comes the link: 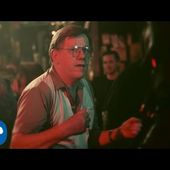 Trivium's official video for 'Blind Leading The Blind' from the album, Silence In The Snow - available 10/2 on Roadrunner Records. Pre-order the record on iTunes at http://flyt.it/silenceinthesnow ...