Soundscape architects Subsignal worked on a new album entitled "La Muerte". The longplayer will hit the shelves on May 25th and comes via Gentle Art Of Music.

Artwork, tracklist and a new video have been unveiled and here they are:

SUBSIGNAL - Even Though The Stars Don't Shine (official single)

(9/10) This autumn seems to become a sophisticated season when it comes to progressive metal music. There have been already some quite exciting records that have been published; like the new album from Gazpacho and now there are two German prog bands coming with new albums too. Next to Vanden Plas it is Subsignal that offers a new journey through the world of sound.

"The Beacons of Somewhere Sometime" is the cryptic title of the new long player which is the forth one of the the band that arose out of the ashes of Siege Even. Brain and soul behind the band are guitarist Markus Steffens and singer Arno Menses who started Subsignal as a project in 2007. Things developed very positively and what began as a project became a fix part of the German prog metal scene.

"The Beacons of Somewhere Sometime" isn't build on a conceptual storyline. But there is a red thread through the various tracks on this long player. The overarching theme is about loss and parting.

When it comes to the music Subsignal became harder again. The predecessor "Paraiso" was in general a bit softer with some tracks that have been close to AOR. The new album brings back heavier riffs. "Tempest" is a first indicator for this, underlined by songs like "Everything is Lost".

But in the end it's not about heavier or softer when it comes to Subsignal's music. It's the band's lambent way of composing great songs that come with big melodies merged with a lot of emotional depth and thoughtfulness. "The Beacons of Somewhere Sometime" is full of those attributes and it's the passion for details, that makes Subsignal's sound complex as well as approachable also for non-musicians.

This long player is the soundtrack for an exciting journey through eleven new tracks from a band that combines technical capabilities with an outstanding sense for good songs. "The Beacons of Somewhere Sometime" belongs to the highlights of 2015 and I would be surprised not finding back the album in some of the 2015 polls. Prog rockers Subsignal posted the fllowing on the Facebook side. Seems that "The beacon of somewhere sometime" will come with a lot of music.

"Ratio meets emotion". Those three words describe the new album of Subsignal in a good way. After the really good album "Touchstones" the band managed with "Paraiso" to meet the high expectations. I personally think, that "Paraiso" is even better than "Touchstone" since it varies a bit more. This has also to do with the fact, that the songs are more in focus. The melodies are a little bit more catchy (meant in a positive way) which makes it easy to listen to the album. But by all this it is still very obvious that excellent rock musicians are at work. They know how to write great prog-rock songs which never get banal. It makes just fun to listen to the album. But "Paraiso" needs attention. Take the time to listen to it, since the band also took time to write the songs. You will discover new details with each round.

When I was listening to the record I was often reminded to Saga, Yes and partly Dream Theater. After an intro called "Time and again" the title track starts with a pretty strong riff. In more than 4 minutes the song describes the journey to you own paradise. I like esp. the chorus of the song. "A new reliance" has some Saga elements and surprises in the verse with a kind of reggae rhythm. Another song which is also to mention is "The blueprint of a winter". This a ballad with a great melody. Probabaly the most commercial song on "Paraiso". The song is actually a duett between Arno Menses and Marcella Bovio. The one or the other of you know Marcella maybe already from Stream Of Passion. Both voices fit perfectly together and they give the song a lot of atmosphere. "The colossus that bestrode the world" follows and brings back 'rock' into the album. "Swimming home" rounds off a really good third record from Subsignal.

Congratulations to the band for the album. A good third release of Subsignal. Give it a try - you will like/love it. Interview with Arno Menses from SUBSIGNAL

Yesterday I had the chance to talk to Arno Menses, singer from the prog-rock band Subsignal. The band will release soon their new album which is named "Paraiso" end of September. It was great to get

Yesterday I had the chance to talk to Arno Menses, singer from the prog-rock band Subsignal. The band will release soon their new album which is named "Paraiso" end of September. It was great to get some more insights from Arno. But read for yourself....

Markus’ Heavy Music Blog: Hej Arno thanks for having the chance to talk to you. How are you?

Arno Menses: I’m good, thanks. How are you?

MHMB: I’m fine as well. How does it feel to release the new album soon? You guys must be pretty proud.

Arno: It feels really good. It iss our third album and since the third album mostly is a really important one we are looking forward to it very positively.

MHMB: So the third album has a special meaning to you?

Arno: Maybe not a special meaning, but as said, the third album is always an important milestone and we hope that it becomes a success. It would be great if it would become our “Master of puppets” or “The number of the beast” (MHMB: Arno said this with a smile).

MHMB: When I have read the title for the album the first time I read “Paradiso”, as the venue in Amsterdam. But than I noticed that it is “Paraiso”. What means “Paraiso”?

Arno: Paraiso means paradise in Portuguese. “Paraiso” is of course not only the title of the album. It is also the title track of the CD. The song is about your own paradise. This is meant in a sense that it is the way to your own inner paradise. And your inner paradise is always for you only. This will be also reflected in the album cover. There you can see the globe as a brain, which can be seen as the symbol for Paraiso. Also in the video clip for the song we work with those kind of symbols, e,g, nerve synapses. Markus (Steffen) wrote lyrics as he also did for a lot of other songs.

MHMB: How did the songwriting in general happen for the new album? Is it a team approach or is it that someone comes with an idea or the almost ready song?

Arno: This time Markus did probably 80% of all the songwriting and he did an excellentjob. Me and David Bertok contributed with smaller portions to the album. So Markus was the main songwriter for “Paraiso”.

MHMB: What would you say are the most differences between “Paraiso” and your former album “Touchstones”?

Arno: We kept the songs simpler this time. The songs and melodies are in focus. Of course we will have still the typical Subsignal trademarks in the songs, but we tried to make the songs less complex. Furthermore the album has a more melancholic touch, which gives “Paraiso” a different atmosphere. Those are probably the main differences.

MHMB: Who is writing the lyrics for the Subsignal songs? Is it you or is it also mostly Markus?

Arno: Since Markus wrote a lot of songs on the “Paraiso” album he also did a lot of lyrics, as always. The rest of the lyrics were written by David.

MHMB: Is it difficult for you to sing lyrics, which are written by somebody else? Just thinking about the title track, which has also some more personal meaning?

Arno: No, it’s not different at all. I know Markus in the meantime for around 10 years, which gives a lot of understanding. Based on this it is not difficult for me to sing the songs with the same intensity as if it would be my own lyrics. Plus I already was a fan of his during the Sieges Even days.

MHMB: You have with “The blueprint of winter” a song on the new record where you have a cooperation with Marcella Bovio. How did this connection get in place?

Arno: Marcella is originally from Mexico and she is living in The Netherlands. She was working already together with Arjen Lucassen in Stream Of Passion. We heard her singing and the idea was born to do a song together for the new album. So we did “The blueprint of winter” and released it as the first single. Actually “Paraiso” was supposed to become the first single. That’s why we also did the video. But than we decided to go for “The blueprint of winter”, since it is a more melodic song. We thought that it is the better one to realease as a single.

MHMB: Are there any plans for a tour in order to promote the new album?

Arno: At the moment we have planned two release-concerts in Germany in October. We are also planning on a tour, which will probably take place in spring next year.

MHMB: It would be great to see you guys also for 1-2 shows in Holland.

Arno: Yes, I agree. It depends if we get a good chance to play in Holland. We played so far on the ProgPower Europe festival in Baarlo in 2011 so let’s see what will be possible with the new record.

MHMB: Maybe there should be a tour package with Dream Theater, Fates Warning and Subsignal, since you all release new albums in autumn ;o)

Arno: That would be great. If they call us, we will be there ;o)

MHMB: A question to you as the singer. Which singer influenced you most?

Arno: Steve Walsh from Kansas  and Glenn Hughes and are my main influences. Even though my voice sounds completely different from these guys I still see them as big influences.

MHMB: How is it actually with Siege Even? Is this chapter really closed forever?

Arno: Yes. This chapter is definitely finished. The book is closed. The differences have been too big in the past.

MHMB: Arno, is there something more you want to tell the people out there?

Arno: We hope that everybody checks our webpage (www.subsignalband.com) or have a look at our Facebook side. If people like prog-rock with a touch of AOR than they are exactly on the right spot. Check your songs and samples. And of course buy the new record if you like it.

MHMB: Arno, thanks a lot for your time. It was a pleasure talking to you. Good luck with the new album and I hope to see you soon in Holland.

Arno: Thanks for having me. 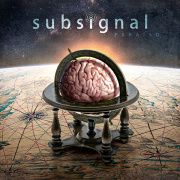