I got Social Distortion on my radar when the guys released “Somewhere Between Heaven and Hell”, an album that saw the light of day in 1992. Mike Ness and his gang filled this record with awesome rock songs. “Cold Feelings", the opener, is still one of the best songs I’ve heard from the band so far, but their discography is of course much wider than only this longplayer.

These days the four-piece comes with a vinyl boxset that’s very interesting and will create excitment for fans of the band. It’s called “The Independent Years: 1983-2004” and it contains four longplayers, all on vinyl. With “Mommy’s Little Monster” and “Prison Bound” the package includes the first two releases, “Sex, Love and Rock ‘n’ Roll” is a more ‘recent' output from 2004 and “Mainliner” is a compilation of earlier done singles and B-sides.

The vinyl boxset, with a release date of December 2nd, features, as mentioned, four record with each of them being done in a different color.

Tracklist:
Mommy’s Little Monster
A1.  The Creeps
A2.  Another State of Mind
A3.  It Wasn't A Pretty Picture
A4.  Telling Them
B1.  Hour of Darkness
B2.  Mommy's Little Monster
B3.  Anti-Fashion
B4.  All the Answers
B5.  Moral Threat Social Distortion are coming to Europe in April/May this year. The band of frontman Mike Ness will play several shows which are an exciting rock experience. Here are the dates: 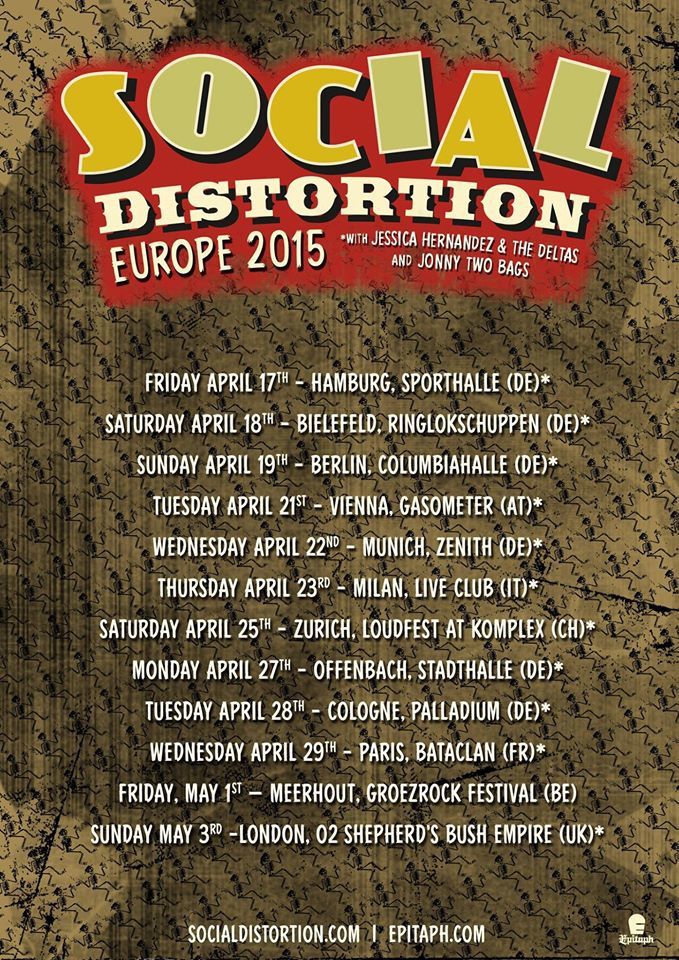 (8/10) Jonny Two Bags aka Jonny Wickerham is probabaly a familiar name for each of you. The Californian guitarist is ten years a crucial part of Social Distortion, the band of mainman Mike Ness. Next to that Jonny played with The Cadillac Tramps for many years too.

After so many years in business the six stringer decided to write and produce his first solo album. "Salavtion town" contains serious and well thought through music which still leaves a lot of space for improvisation. It is a mix of Country, Folk and Punk which characterize the tunes on "Salvation town". This is not a too big surprise thinking about his participation in the mighty Social Distortion. Jonny decided to continue with this kind of music, eventhough he gives his solo album an individual note, which is slightly different from Mike Ness' band.

The start of the record couldn't be better. "One foot in the gutter" is a great grooving opener which is very representative for "Salvation town".  It's a melodic rock song with folk elements that remind my actually to The Travelling Wilburies.

"Avenues" is a bit faster than the opnener and Jonny is duetting with Gaby Moreno. This adds an extra note to the track since both voices fit really good together. I also have to say that I'm very positive surprised about Jonny's voice anyhow. This guy can more than only playing the guitar. He does a great job behind the mic too. Another cool factor in this tune is the accordion, played by Joel Guzman, which is used for the main theme of this song.

"Ghosts" is an interesting song too (actually there are only interesting tracks on the album). Jonny picks up Irish folk influences and involves them in his music. The song reminds a bit to The Pogues and spreads an Irish pub feeling. A track that smells like beer and cigarettes. It's a mainly acoustic based  and it's another duet with Gaby Moreno. I like this very melodic and slightly reflective song.

The album also has a pure ballad. The very emotional and soulful song is called "Alone tonight". the name gives you already a glimpse of an idea about the feelings expressed by the tune. If men get tears in their eyes than with songs like this.

Tom Petty is another name which pops up in my mind while I was listening to the closer "The way it goes". It's a pulsatile rocker with a great sense for a good melody. It's the straigh beat that pushes the song and finalizes a really good debut.

Jonny Two Bags debut was a tremendous surpise to me - in a positive way. It shows that you doesn't have to reinvent the wheel constantly as long as you love the music you play. The album has dedication, passion and sounds fresh.

Fans who love Social Distortion as well as Tom Petty and Johnny Cash should absolutely give "Salvation town" a chance. Beautiful music rock music from a soulful guitarist who knows what's important in music. (7/10) This album kicks ass. You haven’t heard about the Supersuckers yet? No problem. It’s never too late. The band is from Tuscon, Arizona, plays punk rock wit a lot of distortion and  already 25 years in business. The current line-up is Eddie Spaghetti (v/b), Dan „Thunder” Bolton (g/v), Metal Marty Chandler (g/v) and Captain Von Streicher (d/v).

Five years after their latest release The Supersuckers come out with the new album “Get the hell” end of January 2014. It is records number nine in the bands history. They recorded 12 songs and the intro at Willie Nelson's famed Arlyn Studio in Austin, Texas and I must say: It rocks.

A short intro leads to the first real track on the record. It’s the title track “Get the hell”. The song is a straight forward rocker. To describe the music of The Supersuckers you can imagine a mix between a bit of Bad Religion (“Pushin’ through”), Social Distortion (“High tonight”) and The Ramones (“Something about you”). Another favourite of mine is “Bein bad”. Straight to the point and without compromises but with some southern rock influences. You can’t get it out of your mind.

Next to the songs from the band itself, The Supersuckers also put to cover versions on the album. The first one is Depeche Mode’s “Never let me down again”. The band adopted that song in such a way that it fits perfect to their sound. If you don’t know the original version of Depeche Mode you would not recognize it as a cover. The second cover is “Rock on” from Gary Glitter and is another good choice. Those two songs complete and don’t compete with the other tracks on the album.

“Get the hell” has 12 excellent rock song with a lot of street credibility. It’s a perfect soundtrack for a good time and good party.