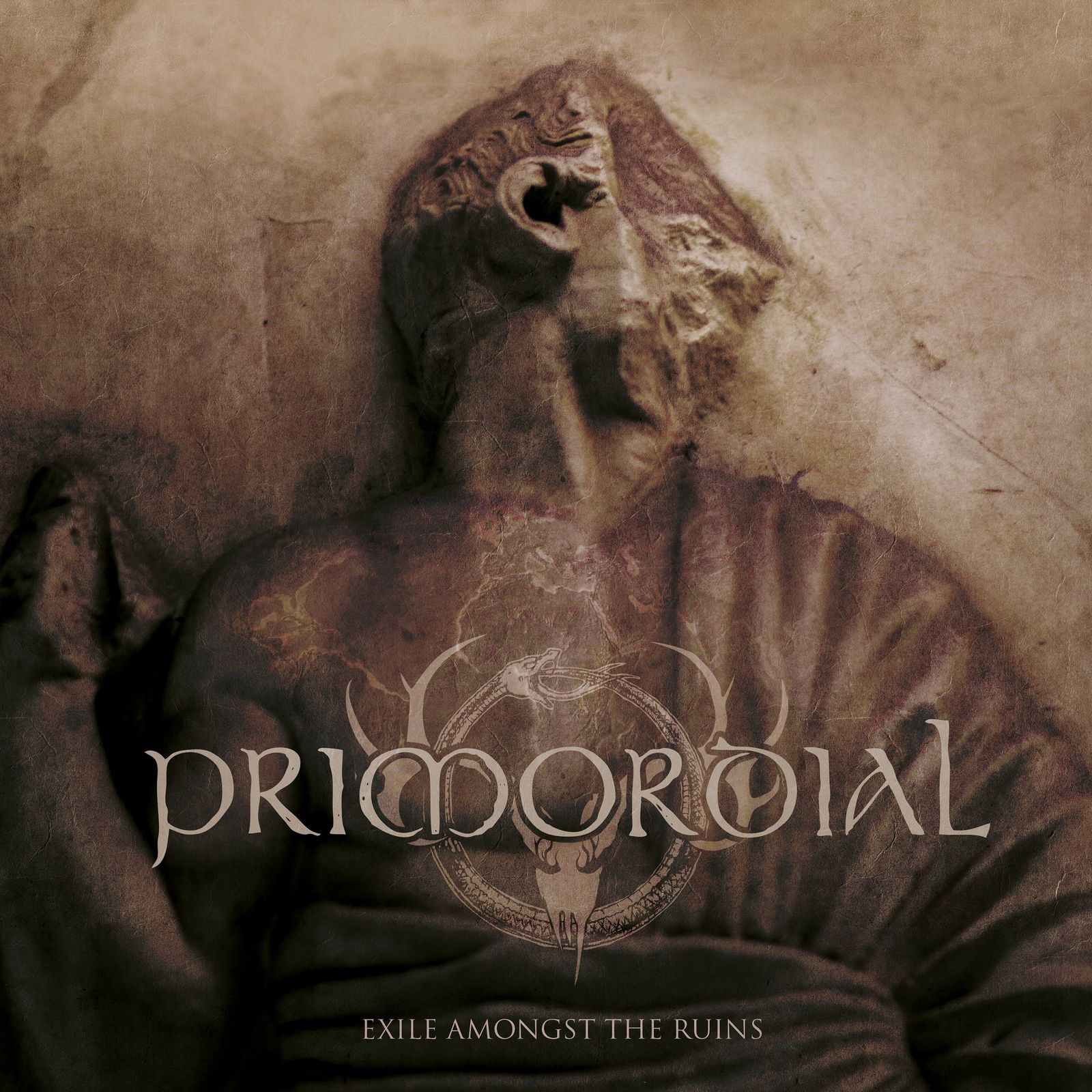 (9/10) Irish Primordial adds another dark shining pearl to their impressive discography. A few days ago “Exile Amongst the Ruins” began to bloom in gloomy shades after four years of intensive creative work.

Primordial’s ninth longplayer showcases a band that constantly grew over time. The quintet steadily worked on their sound and it’s the consistency in the line-up, which makes “Exile Amongst the Ruins” to their most mature offering up to date.

The five-piece powerhouse, hailing from Dublin, put together a tracklist that comprises of eight songs of which the shortest is still above five minutes of length. Based on the excellent songwriting skills each of the tunes is a little highlight in itself, never running the risk of becoming boring or lengthy.

There is enough excitement weaved into each of the tracks and even “To Hell or the Hangman” with it’s hypnotic rhythm puts a spell on you.

The masterpiece though comes at the end. “Last Call”, the title fits very well I would say, is a 10 minutes epos that shows the entire width of Primordial’s sound. Things start atmospheric with drums and a gentle acoustic guitar. Of course this peaceful vibe does’t continue that way and it’s the riff that breaks the harmony after one-and-a-half minutes. Each of the five band members contributes to this milestone. The intensive rhythm-section creates a rock solid bass for MacUlliam’s and O’Floinn’s guitars to shine with doomy riffs. Last but not least it’s frontman’s Alan Averill dramatic vocals that adds a lot of feel and depth to this song. What he does here feels more like storytelling rather than singing lyrics or words only. The song is thrilling from the first note played and drags you deeper and deeper into a world of beautiful darkness and Celtic mood.

Primoridal’s newest delivery is a milestone in metal. These five guys from Dublin create more than merely songs with riffs and lyrics. This quintet delivers a Gesamtkunstwerk that wants to be explored and discovered song by songs and after finished it you have a demand for doing it again. Big stuff.

(8/10) It was in 2015 when Irish pagan metal band Primordial played a show at the well-established Band Your Head festival in Balingen, Germany. If I counted right it was the band's second appearance after having played there already three years earlier.

This time Primordial didn't play the open air stage. The guys from Dublin performed at the Messehalle which gave the set a darker and more intensive environment, something the bands music is benefiting a lot. Even though you can't visually experience this on CD and vinyl, it still impacted the peformence and the vibe of the eleven songs performed that night.

The start of the show is a silent and melodic one with an underlaying malevolence that's slowly rising. "Gods to the Godless" is not only the name giver for this live album, it's also the first song played during this 80 minutes long set. The opener goes back to the early days of the band, followed by two songs from the latest studio output from the Celtic metal band. The melancholic "Babel's Tower" and the heavy pounding "Where Greater Men Have Fallen" are good stuff of recent date.

Another benfit is the production of this album that is done very well. "Gods to the Godless" sounds real. It comes across as an album that didn't went through a lot of adjustments and tuning afterwards. It gives the listener an authentic feeling of this live show, something a record like this should deliver.

"Gods to the Godless" is Primordial's second live album and since the setlist of the recorded show in Balingen was quite different from the songs that are perpetuated on "All Empires Fall", this release also makes a lot of sense. It gives a great overview on the more recent Primordial songs.

This live album is a great x-mas gift for Primordial fans and it's a collection of great songs of the Dublin-based band that give new fans a good idea of the band's creative work so far. 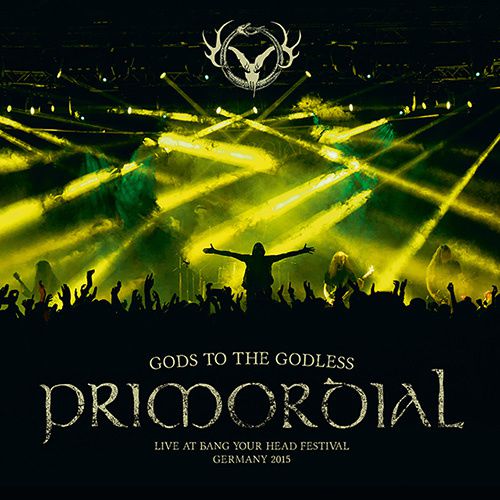 Irish Pagan Metallers Primordial have announced the release of the first live album in the bands history. 'Gods To The Godless (Live At BYH 2015)' will see the light of day next week Friday, November, 25th and will be released as a limited Digibook-CD and 2-Gatefold-LP!

Says A.A. Nemtheanga of Primordial: "It might seem like an unusual move, a double live album. Especially within the scene we are from but the live album was once a staple of most bands career and something we all grew up with in our collection. Pouring over tour dates, gear information and killer live pics. Ok so it's not 'Live After Death' but you can see the attraction and taste the romance involved, right? Fact is though we hadn't planned it, it was basically a happy coincidence, the good people at Bang Your head who took such a risk booking us the first time on a more traditional old school rock festival had us back for the fourth time, gave us a proper headlining set length and happened to mention afterwards that they had a mobile recording device rigged up and ready to go. When we listened back to the tapes we found something we could work with and the idea take shape. If you love the band you will know what to expect, blood, guts and passion and believe us the double vinyl will look beautiful! If we've been in your orbit but you've never trained your sights on us properly this might be a good place to start as the sound is massive, the old songs have some added muscle and the planets aligned to make 'Gods to the Godless' perhaps a great introduction to the band. From our side, it felt like something important to do, like taking advantage of an opportunity to make not only a stand alone album in it's own right but also add something rich to the heritage and tapestry of metal that once hinged on the live album, the tradition reached back into the 70s and 80s and we are proud to have our own small place in that pantheon! And for the record…not one single over dub. This is truly Live and Dangerous…"

Irish metallers Primordial will be on tour late spring this year, supported by Svartidaudi and Ketzer.

Here are the dates: (8/10) The eighth album from Primordial is an intensive piece of music. I’m saying this because the album demands time and effort to grow. Maybe it’s not the first round that convinces everybody, but this will come.

Primordial perfectionised with “Where greater men have fallen” their mix of traditional heavy metal, doom metal and some folk elements. The result are eight emotional and partly melancholic tracks which gets their final expression by the pathetic voice of singer Alan Averill.

Primordial wrote songs from epical length. They are all between six and eight minutes long and give you an hour of intense metal music. The gerenal atmosphere of the album is in deep minor.

The slow but heavy opener "The alchemist" is a brilliant example for this. Those six minutes create a real feeling of discomfort. The more silent parts goes hand in hand with desperate aural eruptions that put a spell on you.

"Babel's tower" continues with a doom riff and a melody line that made me think of Candlemass. For me one of the strongest tracks on the album. The following "Born to night" starts a bit different. It is an acoustic intro that has a certain psychedelic touch. The mighty riff brings you than back to reality. The thunder and rain samples in the tune are well placed and emphasis the expression of the song even more.

"Come the flood" is an heavy and epical song with a certain melancholy - mainly expressed by the vocal lines of Alan Averill.

With "The seed of tyrants" the album has also a very fast track. It's a merciless drum beat that pushes the song from beginning to end. The track is definitely different than the rest but still fits into the context. This is raw power.

The title track "Where great men have fallen" is another killer on the album. The heavy riff and the enormous punch of this songs combined with some folk elements characterize this metal anthem. For me one of the best songs Primordial released so far since it has this atmosphere that combines sadness, desperation and anger to something special.

"Where great men have fallen" became an excellent heavy metal album. Also metal guys that have missed the band so far or didn't found them interesting should give it a try. It's cool stuff.