(8/10) If there is one band right now that can be described as a recent shooting star than it is Halestorm. The four-piece from Canada gained a lot of attention during the last months and years, which is based on good releases including exciting cover version of very different songs. But even more important was the intensive touring of Lzzy and band mates. I had the feeling that the quartet was on the road almost 365 days a year. Starting as support for bands like Bullet For My Valentine Halestorm also ran their own headliner tours during recently.

After having released two EP’s that with interesting cover versions plus two albums it is time to introduce the newest release of the band. The success put some extra pressure on the band. Will they be able to keep the high level of their last release? I think that “Into the wild life” reaches the level of the predecessor “The strange case of……”.

But there are also differences in order to avoid too much repetition. One of those new elements is the fact that the band recorded ‘live’ in the studio instead of taking each instrument one by one. This gives the album a more spontaneous touch that reflects the live atmosphere of Halestorm pretty well.

And those are the tracks on "Into the wild life". "Scream" was chosen to be the opener. It's a song that grows with each time you're listening to it. But it isn't an unforgettable tune.

This changes with "I am the fire". The start is very relaxed, but after a short time the wellness feeling has an immediate end. The chorus is hard and catchy and makes the number to one of the best ones on the labum.

"Sick individual" has a dark character before "Amen" takes over. This piece is a great rocker with Lzzy's vocals in the forefornt. The bridge and the chorus have a touch of the good old Loverboy which makes the song to another highlight on "Into the wild life".

Time for a more quiet moment with "Dear daugher" - a piano-based emitional ballad. A song that follows a similar pattern is the soulful "Bad girls". "New modern love" doesn't really work for me and isn't that exciting as e.g. "Mayhem" - one of the heaviest tunes on the longplayer.

"Gonna get mine" is a bitchy rock song before things het more quiet again with "The reckoning".

"Apocalyptic" is a grooving mid-pace rocker that leads to "What sober couldn't say". This number builds on a big mainstream melody without drifting away into meaninglessness.

Nomen er omen is the motto of "I like it heavy". I guess that Joan Jett was the inspiration for the piece that is the best track on "Into the wild life".

Also "Jump the gun" is a harder track before themore bombastic "Unapologetic finishes an album that makes fun to listen to. It finds the right mix between hard, heavy, soulful and catchiness. Enjoy the newest release that contains very entertaining stuff that gives you a good time. Halestorm worked on a new longplayer called "Into the wild life". The album will be released on April 3. Lzzy and band mates published with "Apocalyptic" already a first song from the album that can be listened to on YouTube. Check it out. 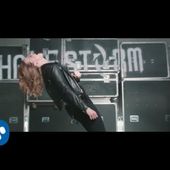 US rockers from Halestorm will release a new album in April this year. It will be there thrid record and got the name "Into the wild life". The record was recorded in Nashvill together with producer Jay Joyce. (8/10) Lzzy and her guys are back. I few weeks ago they have been on tour with Alter Bridge and played several shows in Europe. In addition to that they also released a new EP with 6 songs. The thing is called "ReAniMate 2.0 - the CoVeRs" and contains only cover versions. As we know from the first EP those are very divers and very good. Also this time Halestorm handles quite different stuff.

The opener is their interpretation of Judas Priest's "Dissident aggressor". It takes quite some courage to cover Judas Priest, but the Halestorm version became very good. The difference couldn't be bigger, since the second song is "Get lucky" from Draft Punk. Total other genre, total other lyrics than the Slayer ones, but still great. Halestorm has a good feeling about making the songs their own. Even "Shoot to thrill" from AC/DC is performed in a way that it's just fun to listen to it. Lzzy's rougher vocals do a good job here. A funny side note is when you hear her singing about "…too many women, with too many pills…". Cool version with a lot of power. Going further wih a great version of Pat Benetars "Hell is for children" which is a bit more average Halestorm rearranged the Fleetwood Mac song "Gold dust woman" in a rocking version, which gives the songs another dimension. Last but not least Marilyn Mansons "1996" rounds of a good continuation of Halestroms "cover journey".

An highly entertaining EP which is a good soundtrach for every party.