(8/10) If a band is 36 years in business they must do something right. German metal outfit Grave Digger is such a band that's almost four decades in metal. From their debut "Heavy Metal Breakdown" up till today the fourpiece stands for solid German metal without frills and decoration. Chris Boltendahl and his band mates are part of a prototype for authentic heavy metal, one of the success factors of this quartet. Yes, there is the controversial "Stronger Than Ever", but next to this misled sidestep each of the Grave Digger records has been a treat for metalheads from all over the world.

Grave Digger stay true to themselves which is good news. This quartet isn't a musical chameleon. These guys are solid as a rock and anthems like the powering title track or the uptempo rocker "Call For War" are pure fun for everybody that loves traditional metal. With "Free Forever" the bands honors bands like Saxon, at least there are some obvious parallels with "Solid Balls of Rock", something that's more a quality statement rather than a copycat approach.

Another blistering metal pearl is the fast "Kill Ritual" and also the closer "Laughing With the Dead" belongs to the highlights on "Healed By Metal". This pounding metal hymn is a well-chosen grand finale of an album that shows the relevance of oldschool metal in a fast changing world.

"Healed By Metal" contains everything a well-done traditional metal longplayer has to include. Heavy riffs, might drums and a bassline, acting as the pulse for each song, will push your heart-frequency to the limit. Grave Digger clearly proves again that there is no need to re-invent heavy metal. Passion and authenticity, combined with a sense for good hooks and riffs, is enough for a healing cocktail that's like medicine for everybody's metal soul. 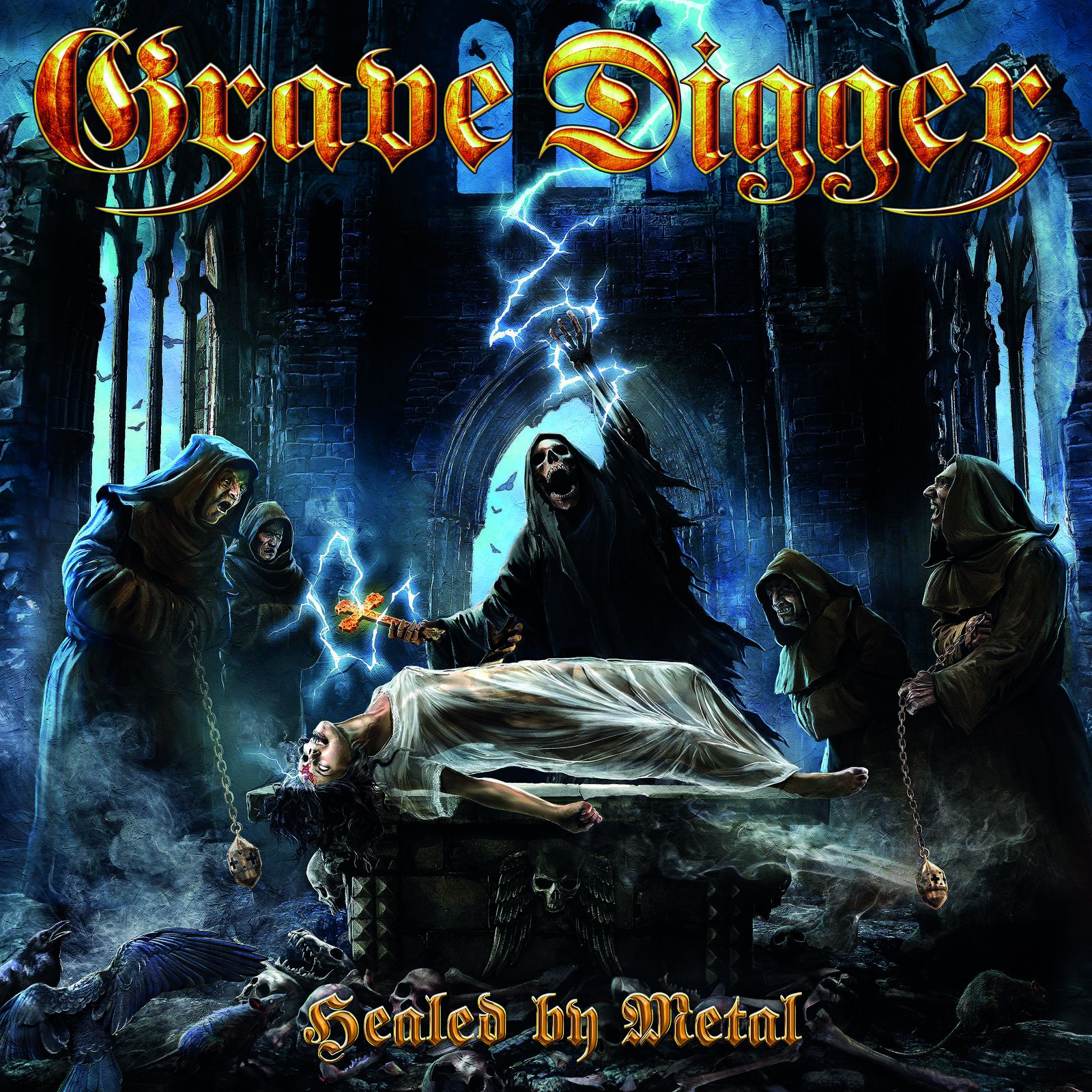 (8/10) There were times when I was almost convinced that the flagship of pirate-style metal disappeared in the endless ocean of metal - forever. But obviously there is still life in the old dog yet and it would be very wrong to write off Running Wild.

"Rapid Foray" is Running Wilds's newest album and it became a strong one. Running Wild is sailing close to the wind and with full speed ahead. Rock'n'Rolf and his crew deliver eleven new songs which are much better than expected. After being in a calm for several years, the band found back to some strong winds that pushes them hard. Running Wild's new record benefits from a lot of back-wind, somethings that's already reflected in the opener "Black Skies, Red Flag". We are talking about a song that covers all trademarks and it could easily fit on one of the earlier releases.

The title track is another well-done tune on the new longplayer. It is based on a vigorous rhythm and some traditional guitar riffs with he melodic vocals lines are the cherry on the cake.
Two more tracks are sticking out their heads from the rest. "The Depth of the Sea (Nautilus)" is an entertaining instrumental that fits very well into the context of "Rapid Foray" and the masterpiece is coming at the end. It feels like each of the ten songs has the simple task to prepare the listener for the epical "Last of the Mohicans". With more than eleven minutes length it exceeds each of the other tunes by far. The start is a very soulful one with some spoken words and an acoustic guitar. It sounds a bit like WASP in the "Crimson Idol" days. The tunes gains pace and power after a while and turns into a moderate paced Running Wild anthem. The chorus is melodic, the guitars are adding some heaviness and the rhythm section build a rock solid foundation. Only little remark though is the question if the song became too long. I think that 6-7 minutes would have done the job as well since there isn't that much variation included.
However, what started with "Resilient" finds its continuation on "Rapid Foray". Rock'n'Rolf brought the pirates back into the water lane, set sails and goes full speed ahead. This album belongs to the bigger surprises in 2016. 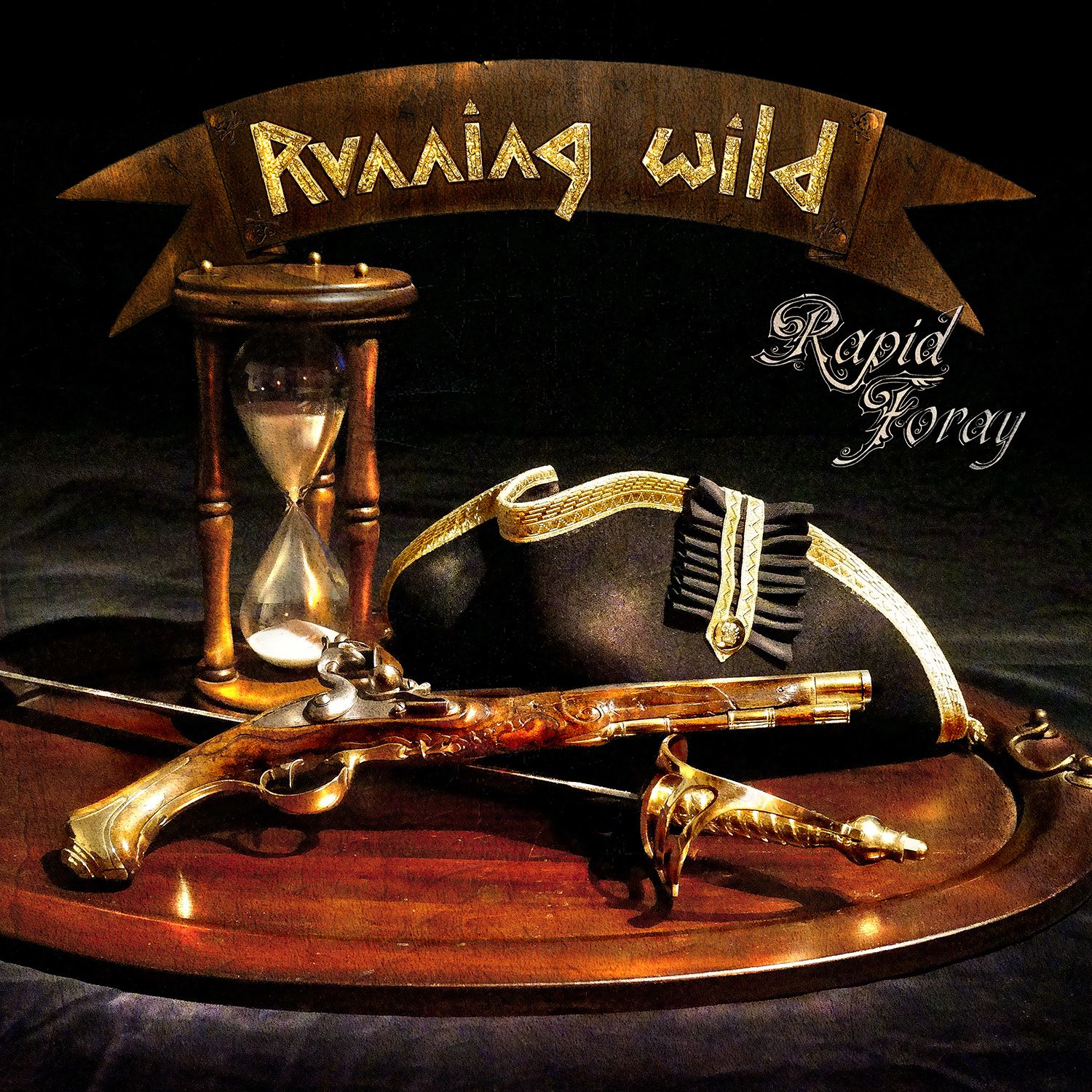 (8/10) What can be better for a band called Witchbound than having the release party for a new album on Walpurgisnight? Exactly, nothing. Witchbound is a 'new' metal band from Germany, that isn't that new. For the ones of you being a bit older the words 'witch' and 'Tarot' have a certain meaning and very close connection. It was axeman Lee Tarot (Harald Spengler, RIP) who was a main pillar of Germany's Masters Of Black Romantic - in other word Stormwitch. As you know, Tarot died far too early and it was in 2013 when Stormwitch played a special show in Giengen, Germany to dignify Tarot and his music. As a part of this show also the older members of Stormwitch came together again on stage and played a few songs from the early days. This was a pretty impressive moment and it seems that it also made an impact on the band members as well. There was some magic in the air.

One and a half year later it is Stefan Kauffmann, Ronny Gleisberg, Peter Langer and Martin Winkler that started Witchbound. The band is completed by Thorsten Lichtner who is doing the vocals. The guys decided that they will finish the last story Spengler wrote. Working together for a while it became more and more obvious that the cooperation feels like much more than only a project. It felt like growing together again as a band - the start of Witchbound.

But let the music talk. Eleven songs, mainly written or co-written by Tarot, made it on "Tarot's legacy"; plus three intros/intermezzos. In total you will get 50 minutes of German heavy metal that reflects the typical Stormwitch trademarks from the early days. Especially some melodylines and riffs made me feel twenty five years younger.

Starting with a rumbling thunder and some giggling witches you face the first real song with "Dance into the fire". The opener reminds a bit to Accept since it has a pounding rhythm and great guitars. Together with the melodic vocals lines it is a tune that works from the very first moment on. The melodic "Mauritania" is next and shows again that Tarot had a the sense for great riffs, perfectly drawn to attention by Witchbound. A highlight for me is the slower "To search for the gound". This tune shows very much the parallels to Stormwitch, esp. the bridge and partly the chorus too.

"Holy ground" with the Arabic influences sounds pretty good as well. Also here you can find the "black romantic" roots from Gerstetten back. The number belongs to the more fast-paced ones on the album and is an 'axcellent' headbanger. The same goes for the heavy "Die sword in hand". Based on a mighy riff the tune itself is a very dynamic one that rocks. I could continue like this because I haven't found any bad song on "Tarot's legacy". The mystical "Sands of time" or the ballad "Trails of stars" - each of them good stuff. And not for nothing it was Hammerfall guitarist Oscar Dronjak who contributed with a guitar solo to "Keep the pyre burning".

What I also need to mention is singer Thorsten Lichtner. He does a pretty good job on the longplayer. His voice fits perfect to music of Witchbound by still being himself.

You can sense that I really like the album since it is has the charm of the earlier Stormwitch combined with modern elements and sounds. The result is a powerful and entertaining album that makes fun to listen to - from beginning to end. All fans of traditional heavy metal need to check this album. It is worth it. Well done guys and hopefully the start for even more in the future (how about a show at the Keep It True?).