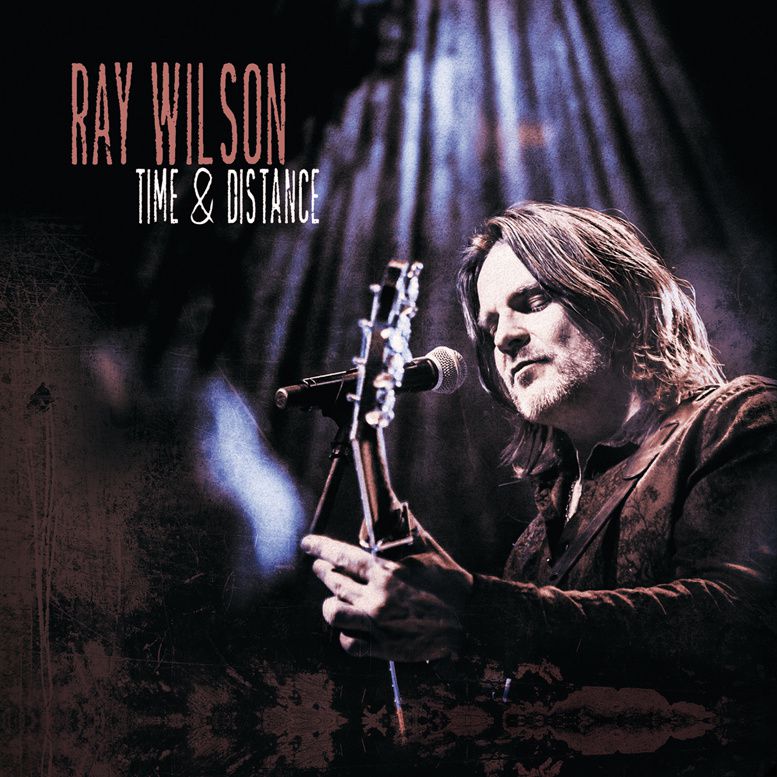 (*/10) Ray Wilson, who doesn't know the excellent singer that enriched Genesis songs with his voice as well as he had an earlier smash hit with his band Stiltskin. "Inside" was one of the most successful rock song in the 90's, also because Levi's used the song for one of their marketing campaigns, bringing the band and Wilson into the spotlight for the first time. While Stiltskin slowly disappeared in musical no-man's-land it was Wilson who used this moment as a springboard for a highly successful solo career.

After having published his latest emotional solo album "Songs for a Friend", Ray Wilson went on the road for playing live. The Scottish singer performed more than 100 shows with an approach of playing live being a matter of heart far more than a 'must do' to promote records.

During his last tour, that brought him through entire Europe, Wilson recorded shows played in Hamburg, Germany, Zoetermeer and Heerlen, both in The Netherlands. Next to the singer and guitarist himself it was a nine-piece band that supported Wilson on this extensive journey, a tour that finds its sonic prolongation with this 2-CD live album feast.

The fact that it's two discs is due to the fact that Wilson focussed on different eras of his career. One part was a retrospective when it comes to his time with the famous Genesis. The first disc is a tribute to this time, featuring tunes like "Mama", "Another Day in Paradise" and "Not About Us". The icing on the cake is a terrific version of Peter Gabriel's "In Your Eyes", a moment that gives you the shivers.

After such a mind-blowing start, CD 2 takes care about the solo material of the iconic bandleader with a soulful version of "Song For a Friend" as one highlight out of 12 brilliant rock songs. Music is about emotion and that's what each of these songs includes. And not only that, also the interpretation of each of these in total 25 songs is a coming right from the heart.

This double live album just gives a glimpse of an idea of the intensity of a Ray Wilson concert which makes it already worth buying. Great songs, great musicians, great release. And don't miss to see the guy live... One of the best singers in rock, Ray Wilson, has a live album in the starting blocks. Wilson is very well known as the voice of Stiltskin and also his days with Genesis are still very present. The vocalist also released several solo albums supported by a lot of touring activities.

Based on that a live album is almost a given. "Time and Distance" will come with two discs of which the first one feature various Genesis classic, including a version of Peter Gabriel's "In Your Eyes. Disc number two instead is a journey through Wilson's solo career.

(8/10) Ray Wilson was quite busy over the last few months. After having released the acoustic "Songs for a Friend" album around summer this year the singer with the extraordinary voice is back with his sixth studio album.

It seems that Wilson found his place by running his solo project. Having reached a wider group of rock fans  being the frontman of Stiltskin and Genesis, Wilson is focussing on solo material since quite a while. With those solo records Wilson built up a very solid fanbase that is growing with each album. And eventhough Wilson didn't get the big spotlight it's his music that is fascinating. It might even be that these two things have an interdependency since it gives Wilson space to breath combined with a huge musical independence.

The new longplayer "Makes Me Think of Home" includes ten songs that are rocking, soulful, reflecting and last but not least authentic. The latter is very much supported by sometimes very personal lyrics which are partly touching and partly leading to a smile on the listener's face.

The album begins soft and melancholic with a song called "They Never Should Have Send You Roses". "The Next Life" is a soulful one too, as so many on this emotional record. It's about the Wilsons' producer and co-writer having had a stroke during the recordings of this album and it comes with the message of cleaning up before it's too late.

There are songs that are about relations, with all the good and sad, but there is also a tune called "Amen to That" which is a rather positive one of a guy escaping from the stressful city life moving into a house in Scottish Highlands for re-finding himself.

More towards the end Wilson introduces the listener to imaginative life by looking on it with the eyes of a child. "Calvin and Hobbes" got the name from the comic strip, which acted as inspiration for Scott Spencer who wrote this track while "The Spirit", with its Western touch, rounds off an album that isn't for headbangers. It's more for people that are searching for a soulful moment i a stressful life.

Wilson's newest album is a continuation of what the guy from Scotland started in 2001. Good music for people that love well-crafted and down-to-earth rock music. (8/10) Steve Hackett, known from bands like Genesis and GTR, will release a live album that is a well-crafted retrospective on the immense discography of the UK-based guitarist. After having published the latest studio album "Wolflight", Hackett got the opportunity of recording one live show on the British leg of his 2015 tour. Since the guitarist did already live recordings in London, it was his ambition to go for another show in the UK and the winner was Liverpool, the home of The Beatles.

Next to this it was the venue, the Philharmonic Hall, that was the right scenery for recording a show that included Hackett's solo highlights as well as some Genesis pearls he was part of. In total 23 songs have been performed which led to three hours of finest (prog) rock music, played by Hackett himself with support of genre icons like e.g. Roine Stolt on bass.

The sound on this live album is excellent. Not only that Ben Fenner did an really good job, also the venue itself supported a dynamic and diversified sound, for the softer as well as for the more rocking parts of the set.

Talking about the set, the first half was filled with Hackett's solo material, including very early numbers like "Ace of Wands" from the solo debut plus "Every Day" and the title track from the 1979 release "Spectral Morning". This half was spiced-up with new songs like "Wolflight" from the mentioned latest studio album.

The second part of this outstanding prog evening paid attention to Genesis, at a time when the band was deep into prog rock and far away from mainstream chart hits of the later years.

One thing I was missing though is a song from GTR. "The Hunter", as one example, would have been a great complementation of this retrospective of one of the most influencial guitarists in UK-rock music.

The acoustic version of this release is already an pure enjoyment that deserves focus and earphones. But also the visual capturing is well done and completes a very positive image of this special show.

Paul Green, who was responsible for the filming, did a brilliant job, capturing the unique moments of this evening in Liverpool. The scenery was kept puristic. It's the music and the musicians that are literally in the spotlight. Still, even though there aren't any frills and decoration, it's a pleasure to watch this show on DVD.

"The Total Experience - Live in Liverpool" is what it is, the full Steve Hackett experience. This release draws a (almost) full picture of Hackett's oeuvre, music that influenced generations of other musicians and guitarist. This man is a real artist from the good old times and far away from these 'service providers' that are around today so often. Well done and a 'must' for fans of excellent rock music.

Live in Liverpool Behind the Scenes Documentary Somewhere South of the River Rehearsal Documentary Videos:
Wolflight / Love Song to a Vampire / Corycian Fire (9/10) Ray Wilson stepped into the spotlight when a band called Stiltskin got famous with „Inside“, a song that was used for a pretty cool jeans commercial. This tune was a great rock track that fitted perfectly into the nineties. But Stiltskin stayed a kind of one-hit-wonder.
The only one that us still successfully in business is Ray Wilson. It goes without saying that his time as singer for Genesis added a lot to his popularity, but since quite some years the singer from Dumfries, Scotland is running his solo project. In the meantime Wilson has a pretty solid crowd of fans and I think that this group gets bigger with each release.
Wilson named the record "Song for a Friend", an emotional title which is very well chosen. The album is dedicated to his friend James Lewis, who passed away in 2015, resulting in an emotional title track that is truly moving. Knowing that it was former Stiltskin guitarist Uwe Metzler who sketched a few song ideas it feels like things have come full circle.
Not only with this background „Song for a friend“ is very emotional record with songs that transport a story that feels at least partly, autobiographic. At least each of them is a short story told as a song. I even think it’s more than just songs. It’s small poems getting even stronger by the emotional power of music. This album shows that Wilson is a real artist in a wider sense.
There is one exception though when it comes to the personal expression of this album. „High Hopes“, the last number on the album, is a Pink Floyd cover. It also has a connection the Wilson’s life since the song expresses what Wilson wanted to say about the situation of three of his band leaving last year. So there is a personal link, told with the words of someone else.
The music on "Songs for a Friend“ is well-crafted acoustic songs that partly reminds of Simon & Garfunkel (listen to the title track). This album isn't meant for parties and loud rock festivals. Wilson publishes soulful singer/songwriter music that needs to be listened to with estphones, or even better, live during one of the upcoming shows.
"Song for a Friend" became a soulful and open album that is touch with it's emotional depth.
A great album done by a likable singer. Prog-pioneer Steve Hackett will release the Genesis Revisited show performed in the legendary Royal Albert Hall in London, UK as DVD/Blu-Ray. The concert was recorded October 2013 in 5.1 Surround Sound. The release date will be June 30st.

The album will be available as standard 2CD/DVD Digipak  - Limited 2CD/2DVD/Blu-Ray Art-Book with bonus material such as liner notes, photos and interviews.

“I'm excited the Steve Hackett Genesis Revisited show at the extraordinary Royal Albert Hall is being released on both DVD and Blu-Ray in 5.1. It was a thrilling musical experience for all concerned with a fantastic light / visual show! Paul Green and team filmed it brilliantly too. It's a feast for eyes, ears and all the senses...”

02. Dancing With The Moonlit Knight

06. The Return Of The Giant Hogweed (w/ Roine Stolt)

15. The Fountain of Salmacis

17. Watcher of the Skies 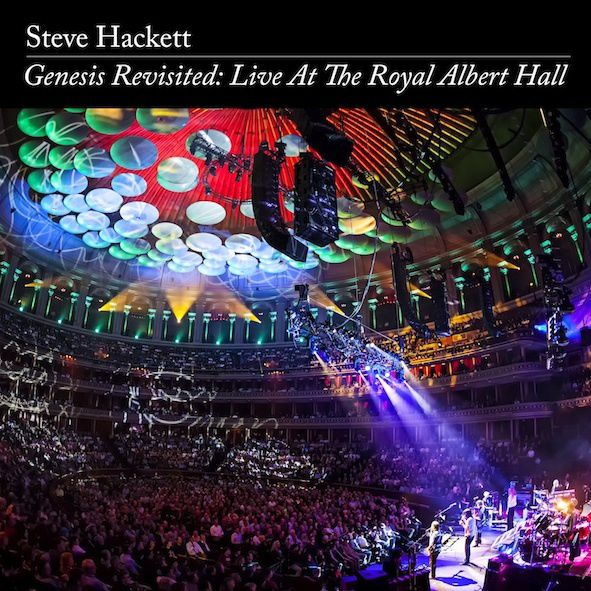