(7/10) One year after having presented a four track EP, Belgium speedsters Evil Invaders push their newest studio album “Feed Me Violence” on the market.  The band didn’t change the general principles of their sound. Evil Invaders still stand for furious metal with screaming guitars and wild leads. What we can conclude though is the improvement when it comes to songwriting. The sophomore record includes more twists and nuances compared to the unbound debut by still including the raw power of metal.

However, pushing the pedal to the metal isn’t everything you get offered by the Belgium quartet. The guys focus on tempo and speed, no doubt. But instead of just push one's foot to the floor the quartet also adds some cleverly placed breaks to their sound, variations that add excitement. The Helloween-inspired “Oblivion” is an example for such a track. The half-acoustic beginning shows another side of Evil Invaders before the tune slowly shifts gears, ending up in a high-paced metal track with double bass attacks. A songs that moves the above mentioned to a next level is the closer “Among the Depths of Sanity”. Partly following the same principles as “Oblivion” the tune is with six minutes the longest one on the album. For me it’s the most mature one to date when it comes to song writing, proving again that Evil Invaders is more then just excessive speed and blind rage. The guys have more in petto and they unveil it on “Feed Me Violence”.

However, songs with breakneck speed are present too. The opener “Mental Penitentiary” takes its power from a merciless tempo in combination with high pitch screams and also the title track is an aspirant for a speeding ticket.

Evil Invaders' sophomore longplayer comes with more than uncompromising speed metal. The guys from Belgium have enough creativity to break the pattern with well-done tunes such as the grooving “Broken Dreams In Isolation”.

“Feed Me Violence” is a longplayer that makes fun and comes with a certain entertaining factor. Youth gone wild on this longplayer.

(7/10) This four track EP boils metal down to its essence. Evil Invaders haven't found a new niche and there thrash metal is still very much influenced by bands like Exodus and some others. However, the passion that the guys put into their songs is worth some respect. It's the wildness and storminess of the young guys that makes them to an interesting thrash act.

"As Life Slowly Fades" is a furious opener. It comes with so much power that blows life into the listener instead of slowly letting it fade away. It's a four minutes power strike that leads to "Raising Hell" in which Joe sounds, with his high pitch screams, like the little brother of John Cyriis

The songs on the 'B-side' are known already. "Pulse of Pleasure" and "Victim of Sacrifice" found a spot on this EP as live versions. Both tunes sound authentic and real, simply how lives metal music should be captured on an album.

Evil Invaders might use the cookie cutter a approach a bit too much on the full-length albums, but on this EP things end up in an entertaining twenty minutes headbanging session that should be checked out by thrash enthusiasts. 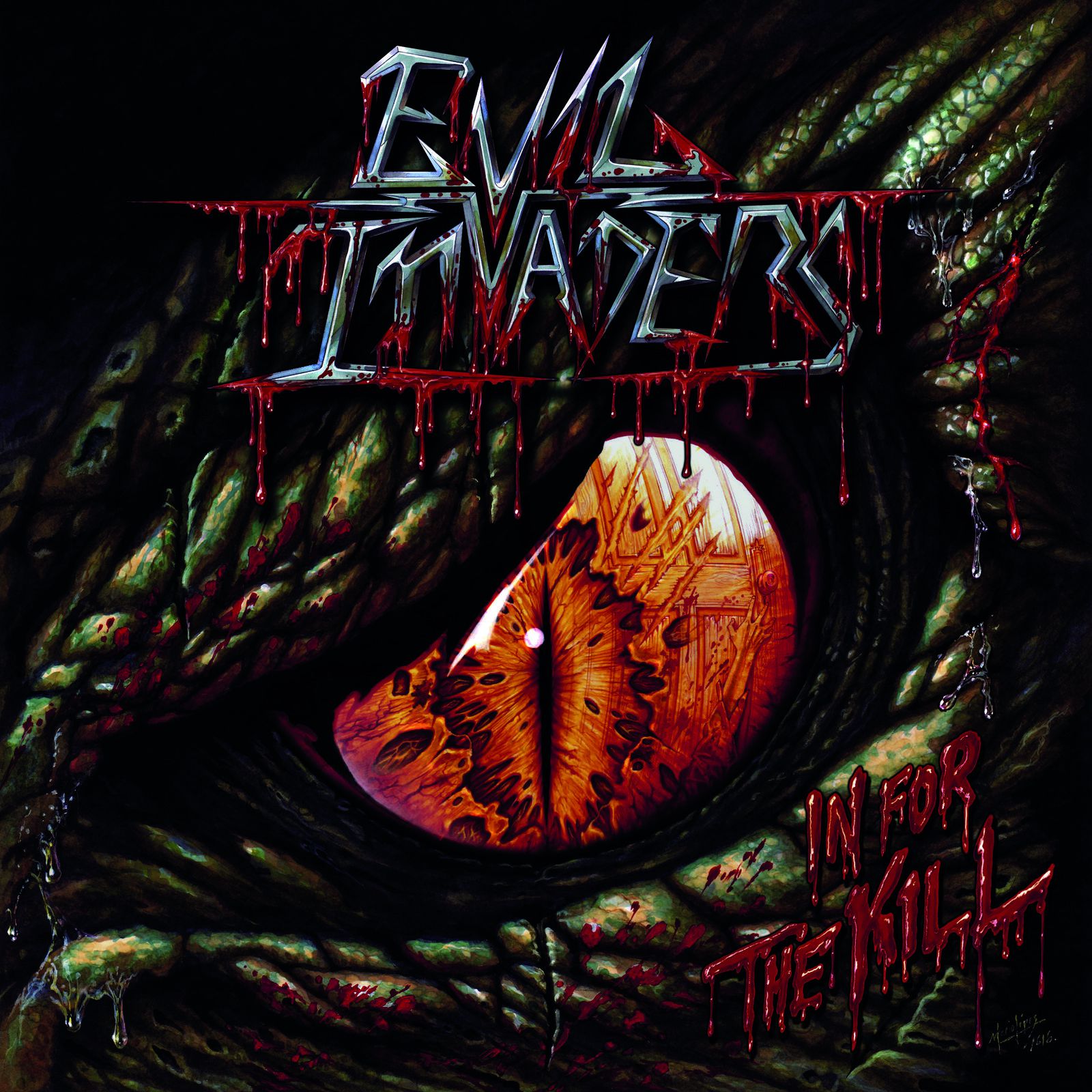 Suicidal Angels, together with Skull Fist and Evil Invaders, will be on a tour through Europe in autumn this year. Here are the dates: 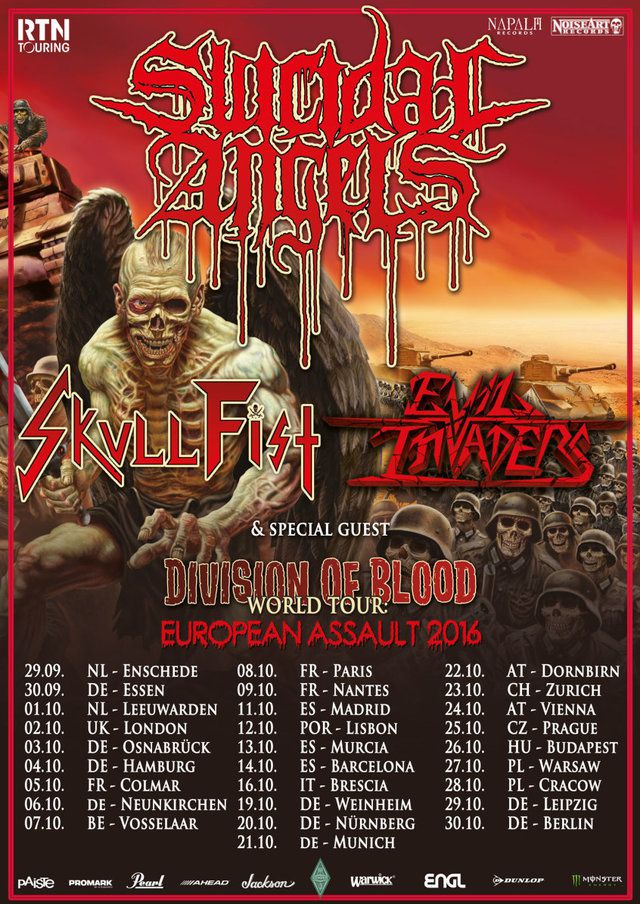 (7/10) Speed metal from Belgium; that's Evil Invaders. The four-piece from Limburg, Belgium released their debut called "Pulse of pleasure" and it brings the good ol' speed metal back.

They have been teamed-up in 2007 and released so far a demo and an EP simply called "Evil invaders". Now, two years later, "Pulse of pleasure" sees the light of day. The first full length album is nine songs long raging speed metal record.

The big benefit of Evil Invaders tracks is the raw energy of the youth that is transfered to each of the tunes very well. They guys just do what they want to do; and that is playing pure speed metal with some thrash and NWoBHM influences. Fast and furious you're pushed forward from song to song and you can't escape.

But there is also no need for that. Evil Invaders give speed metal a new kick. Oldschool metal by making use of modern production techniques leads to this cool debut.

When I heard the album I had to think about the early Agent Steel. This was mainly to two facts. One I mentioned already - speed metal. The second thing is that singer Joe sounds partly similar to Agent Steel's siren John Cyrris, esp. when the higher screams.

Highlights on the album are the mean and fast opener "Fast, loud'n'rude", the pounding "Eclipse of the mind" and the more Maiden-like "Venom". But also the closer "Master of illusion", being a mix of Iron Maiden and Helloween, sounds pretty good and rounds off a cool album.

"Pulse of pleasure" became a fresh and modern speed metal album from a band that just enjoys what they are doing. Very cool headbanging stuff that might lead to some neck problems afterwards.

Evil Invaders revealed the cover and the tracklist from their coming album "Pulses of pleasure". It was Monday night and the Dutch football team had a competion in the qualifying for the next European championship. So it wasn't the best conditions for a concert evening. However, thrash metal dinosaur Destruction came to Rotterdam to rock the house. They had two youngsters as opening acts in their package. Lost Society from Finland and Evil Invaders (Belgium) have been supporting the German thrashers. Both did a pretty good job in warming up the crowd.

Unfortunately I missed Evil Invaders, but what I heard is that they did a quite good gig.

When I finally made it to the venue Lost Society was entering the stage. They inflamed a 40 minutes thrash metal firework and the spark went directly over to the crowd. The fans went crazy and the band turned the venue into a Finish sauna. Temperature was raising immediately. The great thing with Lost Society is the unleashed energy of youth and the unstoppable hunger for riffs. Cool show. 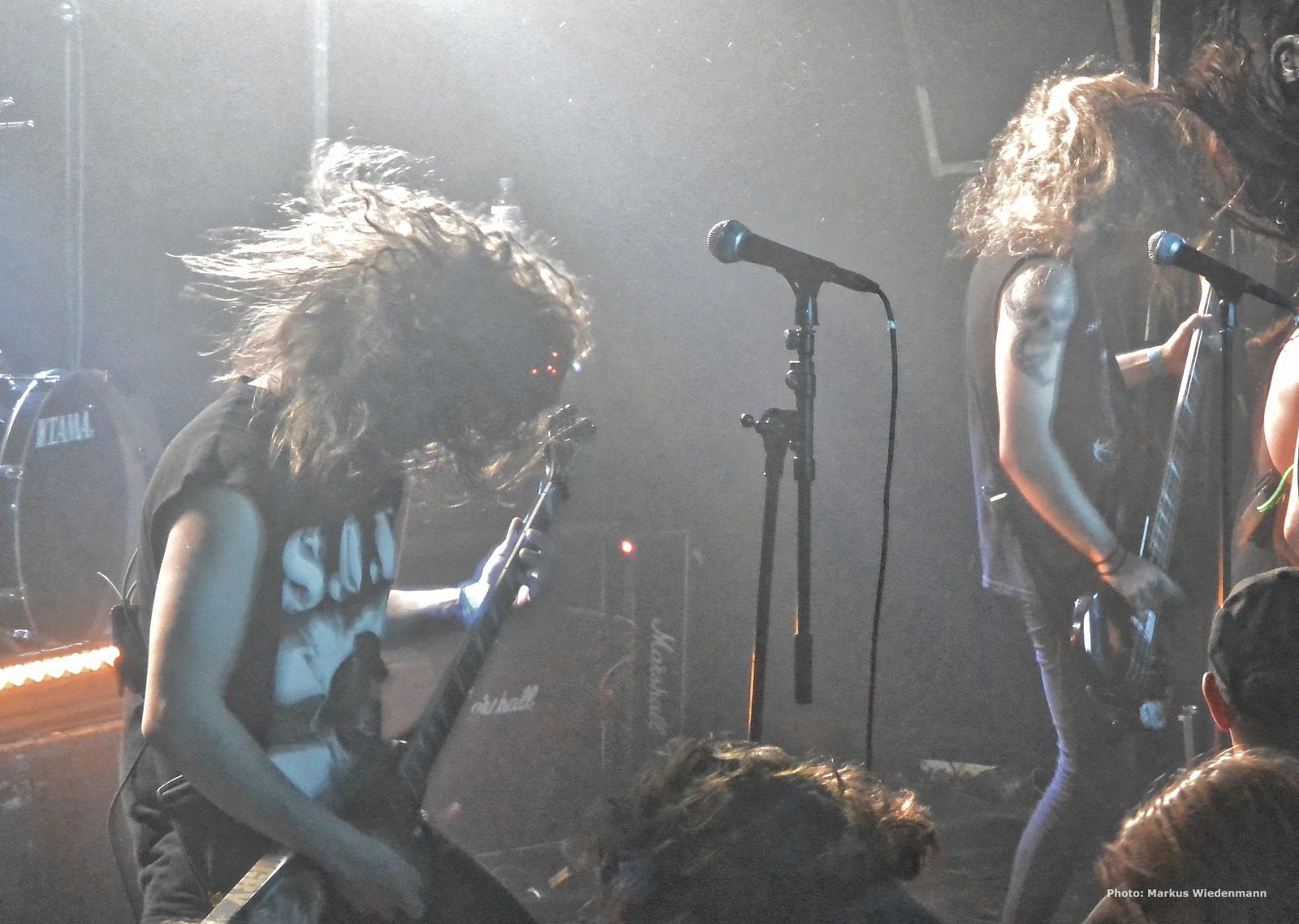 Then it was time for Destruction. The three-piece didn't take any prisoners either. From the very first moment on they made clear that we have the headliner on stage. Many many years of experience is something you just gain. And this experience allows you act and play so authentic. Destruction played a very cool set of songs that covered all stages of the bands development till today.

Schmier is of course more than a singing bass player. His stage presence is enormous. Left corner, right corner, in the middle - it became understandable why the stage had three microphone stands. But Destruction can't be Destruction without the guitar sound of Mike. He is part of the band from the beginning and went through all the ups and downs of Destruction. It is amazing where the small skinny guy takes all the power from. Astonishing what passion can do. Not to forget the drums. Both, Schmier and Mike, could build on Vaaver, who added the heartbeat to the music with his dynamic punch behind the drum kit.

The sound for all bands was pretty good (at least I can say this for Destruction and Lost Society). This was really appreciated and added to the great atmosphere in the Baroeg. Small point of critic from my side was the guitar sound of Destruction. I had the feeling that this a bit too far in the back. And the band classic "Mad Butcher" was so fast that it was hard to recognise. But maybe that was only me and it did do any harm to the great show of the German trio.

All in all the Monday felt like a Saturday night when it comes to the vibe in the Baroeg. And it was probably much better to see the Destruction show than watching football. Netherlands lost 2:0 against Island while the Baroeg just had winners that night.