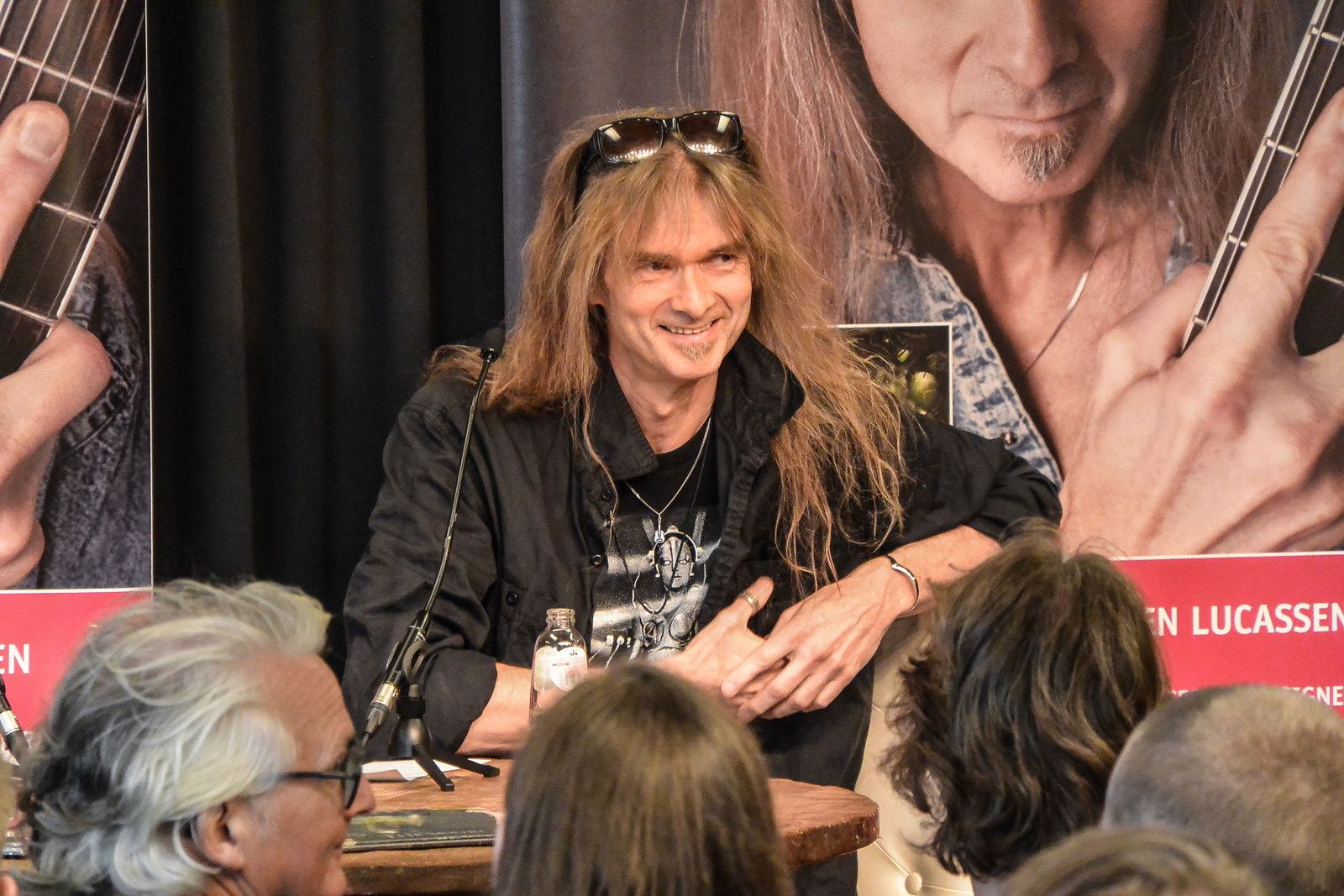 Ayreon's mastermind Arjen Lucassen was on a small signing tour through The Netherlands this weekend. After having had a stop in Venlo, Breda and Bergen op Zoom (all Dutch cities), the guitarist invited for a signing session in Den Haag on Sunday April 30st.

Before signing all kinds of Aryeon and Star One items, the guitarist talked openly about the effort of creating the newest album - a 365 days and 24/7 exercise that led to a fantastic result entitled "The Source". Also the planned live shows in September have been part of the talk that took place prior to the signing session. In the beginning it was one show at 013 that stood on the list but was quickly extended to three shows - all sold out within no time. Unfortunately no extra shows can be added. This has mainly to do with the fact of an huge organisational pre-work to safeguard a participation of as many as possible Ayreon guests and friends.

Listening to this extra class musician was a pleasure. It's amazing with how much passion and humbleness Lucassen talked about Ayreon and his dedication for music, all very much appreciated by fans that made it to this extraordinary session. (10/10) It's maybe a bit of a strange metaphor, but listening to Ayreon's new album feels like an exciting journey through all kinds of different landscapes. Having a look around is a thrilling thing with an endless offer of new impressions. Sometimes it's the smaller differences and other times it's a full change of what reaches your eyes. "The Source" is a musical version of such a journey and/or the perfect soundtrack. It's an album that constantly offers new impressions. This album is more than just a number of songs that end up on the same carrier; it’s a comprehensive work that combines creativity with musical perfection.

Releasing a double CD package is a challenging endeavor since it demands a bigger amount of exciting song. Having listened to "The Source" several times led to one conclusion: the amount of creativity that sits with Arjen Lucassen is amazing. The songs on these two discs are more than just tunes - they are soulful compositions that cover everything between fragile nuances and dark guitar sounds. The glue that keeps all this together is Lucassen's excellent guitar and his musical vision.

As with the earlier Ayreon releases also this time it’s a storyline that connects the different chapters on “The Source”. This album is linked to the 2008 release “01011001” and can be seen as a kind of prequel. The story is about The Alphans and the planet they are living on. The situation gets worse over time which leads to a decision to give all decision power to a computer mainframe. The unforeseen effect hot the Alphans hard since the machines concluding that they themselves are the cause for all trouble and should be eliminated. As with Noah’s ark there’s one ship that can bring some of The Alphans to a new planet – Planet Y. What sounds like a savior includes an element of doom as well. These chosen ones have to leave family and friends behind with the certainty of no moment of reunion. The story continues with the rise and fall on planet Y which you can mainly discover on disc 2. I don't want to spoil too much here.

The songs on “The Source” are beyond any doubt. Lucassen serves a kaleidoscope of compositions that tackle everything a fan could expect from such an album. I don’t want to dissect each and every anthem on this longplayer. These tunes needs to be listened to and not read about. However, the first two songs give a good overview of the cinematic width of this release. Silent notes are interacting with heavy riffs, the latter being something notable since “The Source” is partly heavier than the predecessor. This benefits the album since it creates even more excitement and arcs of suspense.

As with the earlier Ayreon albums the Dutch multi-instrumentalist didn’t do things just on his own. Lucassen has a constant partner in crime when it comes to Ayreon. Dutch drum icon Ed Warby is a constant contributor and also this time it’s him providing the heartbeat for this album. Next to Lucassen himself it’s also Paul Gilbert, Marcel Coenen and Guthrie Govan contributing on guitar while Marillion’s Mark Kelly created bigger soundscapes with his keyboard. The by far biggest group of guests are all the singers that performed on “The Source”. It’s a very long list that would be too much for this review, but while listening to the album you can hear many very family voices.

Ayreon live shows are few and far between which is, based on the included musicians, a more than logical consequence. Up to now there are three dates confirmed. Ayreon will be on at 013 in Tilburg. The three shows will take place mid-September and have been sold out in no time. Ayreon is a class on its own – a project, created by a creative mastermind, that’s unique in rock music.

Chronicle 2: The Aligning Of the Ten (9/10) When two of Hollands best musicians team-up the result can only be something outstanding. And this happened when multi-instrumentalist Arjen Lucassen and vocalist Anneke van Giersbergen decided to create a fantastic new album called "The diary".

Both musicians know each other already since quite a while. The first cooperation took please many years ago. It was in 1998 when the "Into the electric castle" from Ayreon was released and the same thing happened again ten years later for "01011001".

Their new project is called The Gentle Storm. "The diary" is the name of the longplayer, that is actually a double CD. Both CDs contain the same songs, just differently arranged. The first disc is called 'storm version' and comes with the more powerful arrangements, while CD 2 is the 'gentle version'. And names are self-explaining.

"The diary" is a concept album. It is build on a story of a sailor that starts a two years journey, leaving his wife back in Holland. Since the story takes place in the seventeenth century the only way to keep contact was sending letters. It's those writings that are the center of the story.

The songs are all brilliant. It's not metal and it's not prog. It is soulful rock music that, if you close your eyes, starts a movie about the two protagonists. Both CD's are mainly acoustic and Lucassen experimented with a lot of different acoustic instruments - around 40 in total. This includes also orchestrated parts that add another moment of tension to each song. The same goes for the embedded folk elements with string sections which are spot-on.

Tunes like the melodic "Shores of Inda" or the outstanding "Haert of Amsterdam" are musical pearls that offer so many details that you can listen to them again and again and again. The 'heaviest' track on the album is probabaly "The storm". Of course, a song with such a title can't be a ballad. It comes with a quite dynamic guitar and the tune spreads a gloomy atmosphere.

It took a year to make this longplayer and it was very well invested time. The result is  a marvelous sonic journey into a moment long ago.

I can recommend this diverse and intense album. This is music on a very high level that you should not miss. 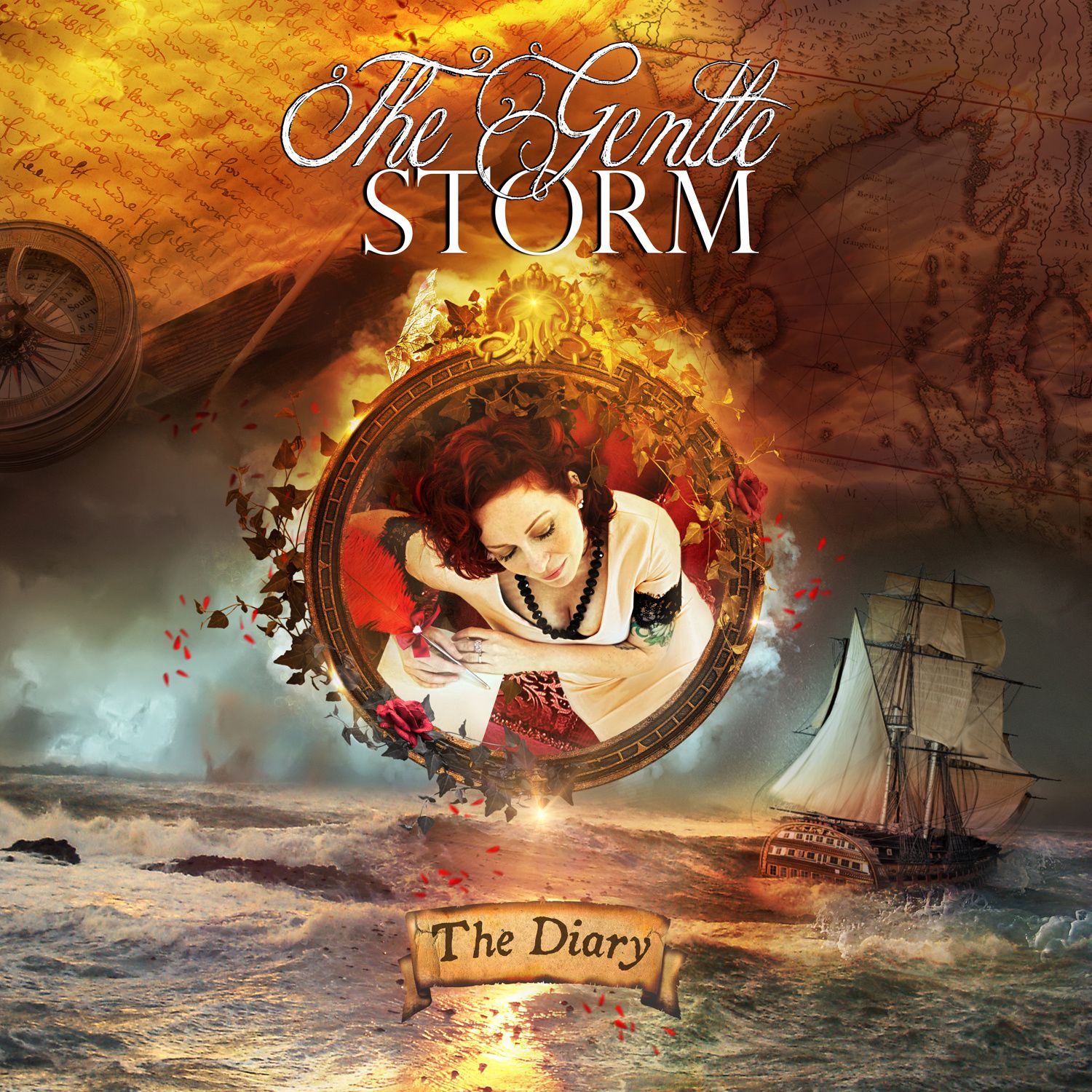 Arjen Lucassen and Anneke van Giersbergen started a project called The Gentle Storm. The iconic musicians from The Netherlands have worked together and produced and album called "The diary".

A first song of this album is published. The track is called "Endless sea" a lyric video can be watched.

Both musicians comment: “Endless Sea is the album opener and it serves as an introduction to our story-based album. Susanne, the main character, sings about her husband Joseph, who has just sailed out on another long voyage to the Far East. We are very excited to offer everybody a first taste of our forthcoming album with the release of these lyric videos. This is such a special album to the both us."

Furthermore the band will also play some accoustic dates in a few cities:

And there will be some more dates in the full line-up (unfortunately with Arjen Lucassen): Arjen Lucassen has been hard at work for the past few months on the forthcoming new Ayreon album 'The Theory of Everything'. Ayreon albums are known for their array of guests, and now Arjen is launching a special online contest so that fans can guess the musicians that will be featured on the album.

Fans can hear a snippet of music at the link below, and then guess who the musician is to be in with a chance of winning a prize. The answer will be revealed in the coming days and new contests will appear weekly. Guess the vocalist 1 - Ayreon "The Theory of Everything"

Here is the first 'guess this musician on the new Ayreon album' contest! So...who is this singer? We'll randomly pick a winner from the right answers on Facebook and send some goodies.Have fun! ...