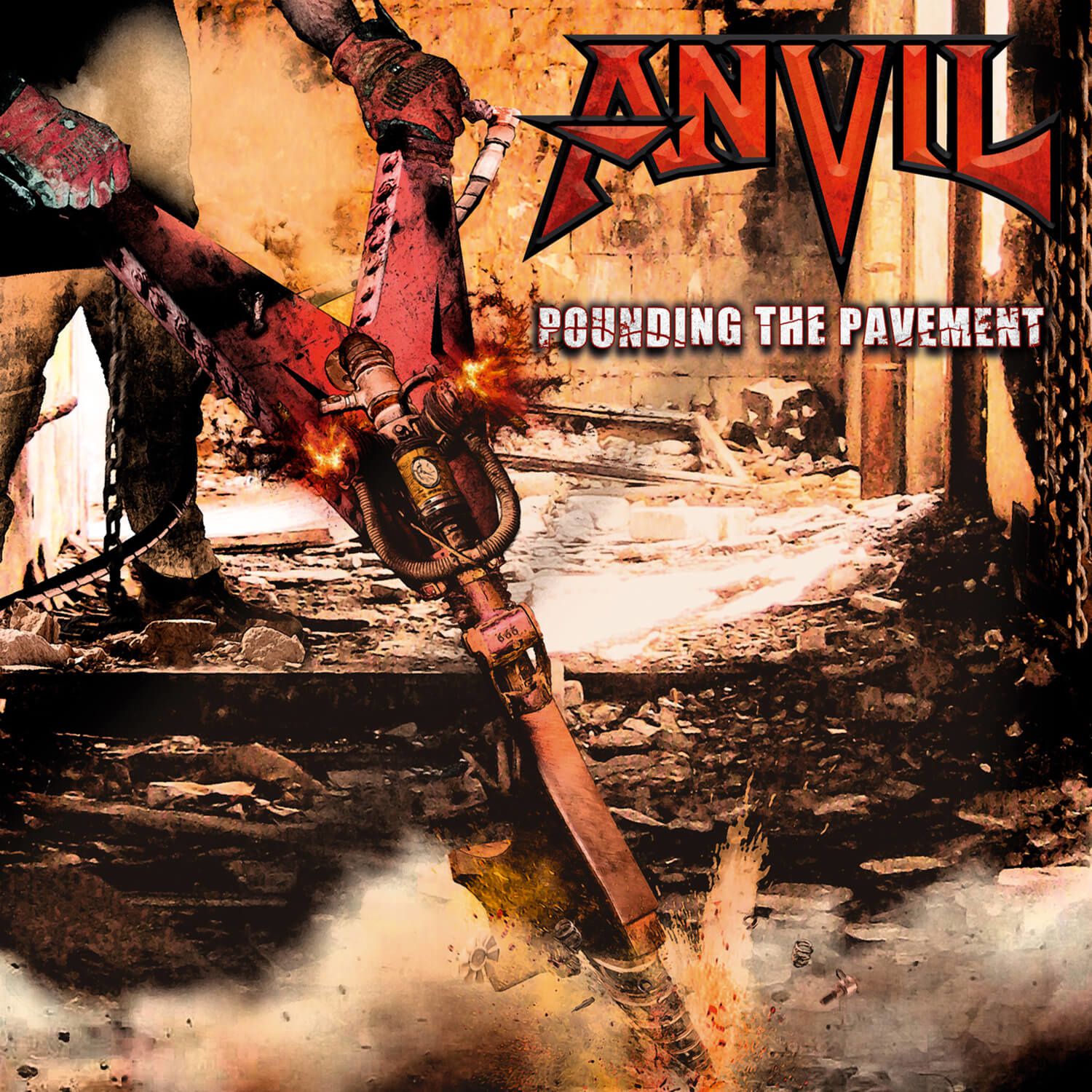 (8/10) The story of Anvil is an emotional rollercoaster, the story of a band that never gave up, following their passion. These guys are a role model for staying true to themselves and fighting for what you live for. Anvil is more than just a a band. Anvil is a matter of heart.

Records like "Metal on Metal" and "Forged by Fire" have been excellent metal longplayers before the 90's made life difficult for the trio from Toronto, Ontario. Anvil went through some tough times, all summarised and documented in a perfect fashion in "Anvil: The Story of Anvil". This documentary is a masterpiece, focussing on Lips and Ro Reiner and their willpower when it comes to metal and Anvil.

It was this film that marked a turning point for the Canadian trio. Anvil were all of a sudden talk of the town with a lot of attention for the band and positive reactions for the documentary. Things started to turn into something more positive and Anvil got the chance to make hay while the sun is shining. The guys started to work on new songs and released a next longplayer in 2011. "Juggernaut of Justice" was the first one after the trio inked a deal with Steamhammer with "Hope in Hell" and "Anvil is Anvil" following, both excellent metal record too with a lot of firepower.

"Pounding the Pavement" is Anvil's next hammer blow that contains twelve new metal smashers per excellence. As with the earlier albums also the newest one isn't built on any compromises. The trio presents another excellent longplayer that proves the fact that metal has nothing to do with age.

Tracks like the merciless "Ego" belong to the best Anvil ever wrote and recorded. A song can't be more spot-on than this awesome piece of music. Anvil pushes the pedal to the metal more than once. The Motörhead-inspired "Black Smoke" is one of the songs that clarifies why Anvil belongs to the first generation of first speed metal bands.
Next to these furious songs Lips, Rob and Chris also put a foot on the break here and there. Mid-tempo stampers like "Bitch in the Box" and "Nanook of the North" are awesome riff monsters, sonic beauties for every true metal fan. Furthermore the spirit if rock'n'roll is the foundation for the well-done "Rock That Shit" and it's the grooving "World of Tomorrow" that rounds off a more than well-crafted metal record.

"Pounding the Pavement" became a superb longplayer of a band that lives for metal music. A metal collection without this longplayer isn't one. Canadian metal veterans Anvil worked on a new album. The longplayer is entitled "Pounding the Pavement" and will be released on January 19th, 2018 via Steamhammer/SPV. In total it is twelve new metal anthems that will kick-start another metallic year. Fans always wanted Udo Dirkschneider doing Accept songs as being part of the regular U.D.O. shows. And of course, these old classic are awesome and milestones in metal music.

But U.D.O. is not Accept and therefore Udo Dirkschneider decided to do a tour with only playing old Accept stuff - for the last time. This is a bit sad since it's always great listening to him singing tunes like "Fast as a Shark". But on the other hand, these shows are the perfect moment to revitalise the 80's, listening to the singer with the iconic voice, doing great songs.

To have a clear distinction between his own band and the "Accept-songs-shows" Udo and his gang sails under the banner of 'Dirkschneider', performing 2 hours of Accept milestone.

But before the small guy with the great voice started it was time for Burning Rome to prepare the fans for what was supposed to come. Unfortunatelly I missed the guys and can't report more about their gig. Then I arrived it was time for the first legend of the night - Anvil. Since you all are metal fans I don't have to introduce you to this trio. You followed all the ups and downs of this band, that belongs to one of the most honest, true and authentic bands in metal (in case you seriously haven't heard about them before, watch their movie "The Story of Anvil").

Steve, Rob and Chris just rocked that night. A well done setlist was really celebrated by the fans. A lot of the great Anvil songs have been performed. "666", "March of the Crabs" and "Metal on Metal", do I have to say more? All excellent food for headbanging and true energizers.

That Anvil is a band that has a close link to their fans became for obvious already during "March of the Crabs", where Lips stood in the middle of the venue, surrounded by fans, playing his guitar. Such a start was more than just a musician and fans, this was a homogenous moment of appreciating riffs and metal, all together.

After such a really cool beginning the rest of the show could also easily live up to expectations. I mentioned the old stuff, but also "Daggers and Rum" from the latest album "Anvil is Anvil" have been performed, a song that has this 'pirate' vibe which  fits suroringly good to Anvil's sound.

The trio hammered 60 minutes of pure metal into the crowd and I'm very happy that the guys finally get the appreciation they actually deserve. Then the stage was prepared for Udo Dirkschneider and as I said in the beginning, it became a magic night with Accept songs. 2 hours of old stuff that included everything an Accept fan could ask for. "Breaker", Restless and Wild", "Princess of the Dawn", TV War"... you name it. And there is no doubt about the fans really celebrating each note played.

So, one thing are the songs itself that are all a treat for your metal ears. But it's also Udo Dirkschneider performing these tunes that makes them special. He is the original singer and when he sings tunes like "Balls to the Walls" it's just a moment that gives you the shivers. And it's more than only him. The legendary frontman has also a good band supporting him. Fitty Wienhold on bass and Udo's son Sven, both ensuring a solid rhythm foundation that has a hard punch and with Andrey Smirnov and Kasperi Heikkinen, the band can also build on two pretty good guitarist.

That means, in the end it has been the song, the frontman and the band that gave the fans a two hour metal blast, from a lot of headbanging to enthusiastic sing-a-long parts in the beginning of the "Fast as a Shark

All in all it was really good show with songs that we might not hear anymore from Udo. I hope that he rethinks this decision and still adds one or two classic to his future U.D.O. shows. But to be safe, better check out the upcoming Dirkschneider dates and be part of such an impressive retrospective on German metal from Solingen. 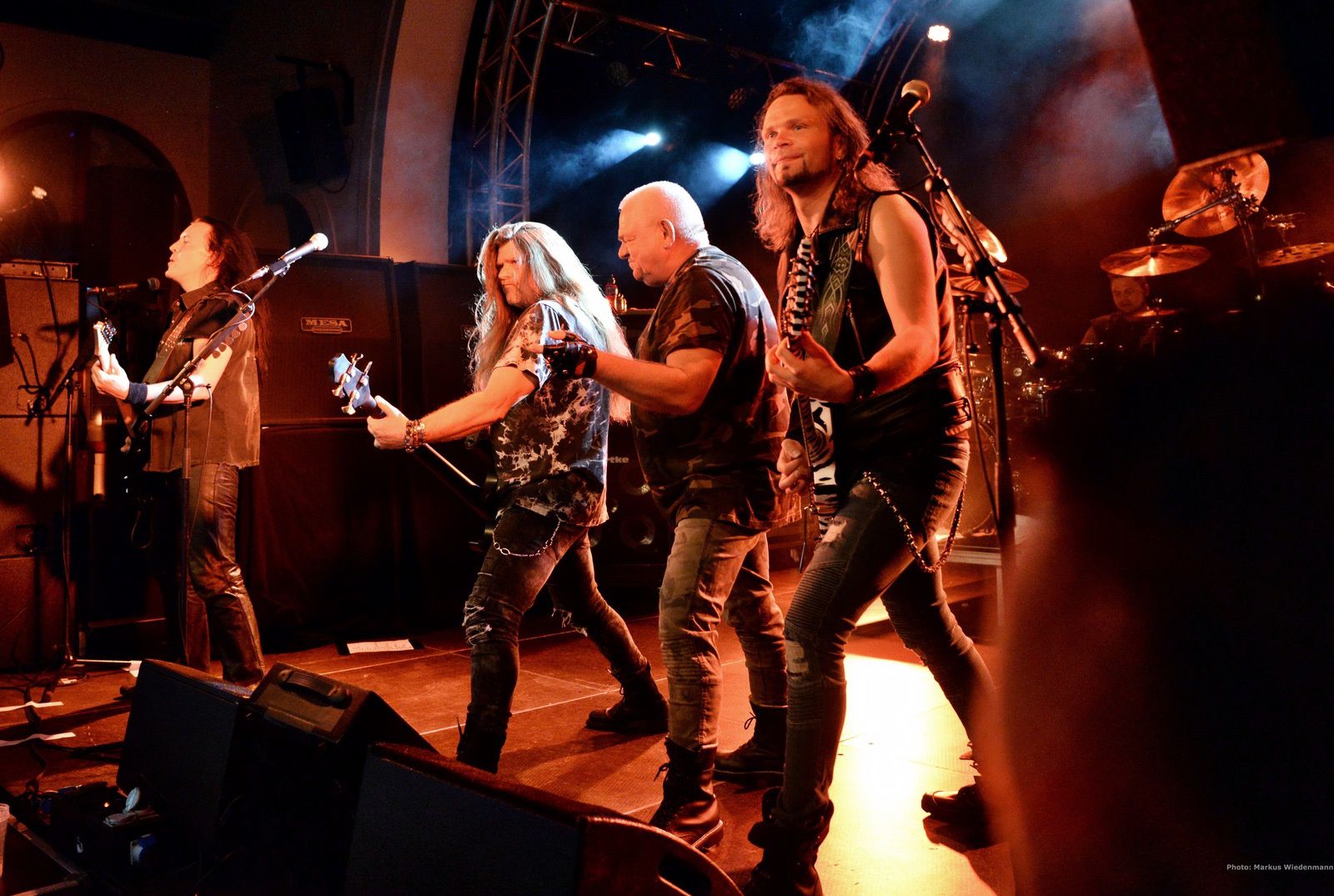 For all my Dutch and Belgium readers - don't forget that Udo Dirkschneider, together with his band, will play a show in Tilburg tomorrow night. It will become an evening full of Accept songs, which sounds very exciting. (8/10) Introducing Anvil would be like carrying sand to the beach. If you haven't heard of Anvil before you either navigated to the wrong blog or you're really young or you missed the legendary documentary "Anvil! The Story of Anvil" ... or all together.

After having had a quite exciting past with some ups and a lot of downers, Toronto-based Anvil is looking forward into a bit more positive future right now. "Hope in Hell", the predecessor, was already pretty good and the new album fits seamless as being a continuation of a re-vitalized Anvil.

Steve 'Lips' Kudlow, Robb Reiner and Chris Robertson hammers eleven new metal highlights right into your ears. The starting triple is already belonging to the jaw-dropping songs on the longplayer. "Daggers and Rum" marks an interesting beginning. Anvil unveils their pirate passion with this number that has a bit of the old Running Wild. It's a cool and unexpected way to open an Anvil album.

What follows next is "Up, Down, Sideways" which is one of these song that have this unique Anvil sound. It's a faster upbeat track, it's a real headbanger. "Gun Conrtol" instead is kept slower and comes with an irresistable riff and the almost hypnotic chorus of this number makes the track even better. This beat is like a hammer hitting the anvil.

A tune that comes with a similar pattern is the slow rolling "Zombie Apocalypse" and with "Ambushed" Anvil has a real live hymn on the record.

Towards the end things get faster again. "Run Like Hell" is introducing a finale furioso before the mighty "Forgive Don't Forget" closes an exciting and entertaining dic. "Anvil is Anvil" - this is more than the title of an Anvil album. This is a statement that gets even more manifested by this longplayer.

Anvil are a band that first of all has excellent songs up their sleeves, something that goes for the new tracks as wel as, of course, for the old classics too. Next to the music Anvil is the best example for dedication, passion and never give up - something that's underground, real, authentic and metal. You guys rock. Anvil released a new video. The song is called "Badass rock n roll" and is from the latest album "Hope in hell". Good stuff. taken from the current album 'Hope in Hell' For me it looks like, that the release of the new Anvil album is similar to the release of a new iPhone. Expectations are very high and in the end it is just a phone - or like in this case a CD ;o)

For me it looks like, that the release of the new Anvil album is similar to the release of a new iPhone. Expectations are very high and in the end it is just a phone – or like in this case a CD ;o) It sounds maybe negative, but it is not meant like this at all, since Anvil released an album with their typical trademarks.

I listened now several times to the new album called “Hope in hell” and I must say, that I like it a lot. Of course the album is not a revolution in the metal business and Anvil also didn’t become a progband. This is good. They do what they can do best and this is writing straight forward metal song with some real street credibility. Esp. Anvil knows all the ups and downs in the music business, they never gave up and they never lost their positive approach.

Songs like “Badass rock’n’roll” and “The fight is never one” are really good straight forward metal songs which makes fun listening to. The title track has a pounding rhythm which drives the song. I think, that the band was inspired by Deep Purple when they wrote “Through with you”. Esp. in the beginning the main riff reminds partly to Deep Purple’s “Smoke on the water”. But nevertheless – a good song. With “Mankind machine” the band even manage to get the technical ‘machine vibe’ into the song. “Shut the fuck up” is than the last song on a great album and makes appetite for the live shows of the band.

So, like said in the beginning, “Hope in hell” is a good standard metal album which is worth listening to. Give it a try, since I was happy that I did it.