It’s so strange. The first question which popped up in my mind when I got the new Running Wild album “Resilient” was: "Who played the drums". But I refuse to go further with the discussion in this review, because Roch'n'Rolf himself didn't want to talk about it and because for me the songs are the more important part on the album. Since I was grown up with “Branded & exil”, “Under Jolly Roger” and “Port Royal” those masterpieces are for me still the reference. The new album can’t live up to those mentioned milestones of the band, bit that doesn’t mean that “Resilient” is bad. Actually it is quite entertaining.

The opener “Soldiers of furtune” is a typical Running Wild song. Pounding guitars and a pretty catchy chorus. A good opener for this album. The title track, and also “Down to the wire” are for me two of the weaker ones on the album. They have a bridge and a chorus which doesn’t really stick and the songs have not really exciting moments. With “Adventure highway” the tempo and the fun increases and also “The drift” is for me one of the better songs on the album. It brings back the old Running Wild. A heavy guitar meets powerful melodies and a cool chorus. “Dessert rose”, as well as “Run roit” has a clear hardrock touch, which surprisingly fits pretty good. This kind of energy I would have loved for the latest Krokus release. “Fireheart” became the fastest song of the album. The headbanger “Cystal gold” is impeaching the privatization of water rights and “Bloody islands” is the real pirate style song on the album. It starts with the sound of some waves and a sailor background choir before a typical Running Wild sound closes the album.

Also good to see the the cover fits to Running Wild again.

So – “Resilient” is not a new “Port Royal” or “Under Jolly Roger”, but it’s much better than “Shadowmaker”. It will not revolutionize the metal world, the album is not very innovative, but the album reflects what Rock’n’Rolf can do best. This is writing good metal songs which are easy to follow and make your head bang. I like the album since it is easy to digest and has a high entertainment factor. 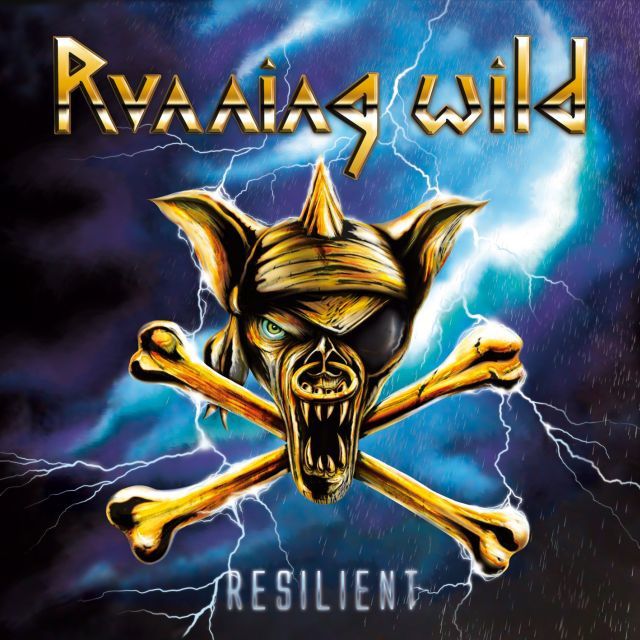