What a prefect day for a metal festival. Overcast, a few sunrays, a nice temperature, some good bands and a lot of metal - perfect conditions for a great day out. However, the first challenge was to get to Eindhoven. This has nothing to do with the DMF. It was more the vacation period that brought many people on the roads that Saturday, which led to some traffic jams and delays.

After a bit of a hassle on the highways I finally made it to Ijssportcentrum, unfortunately a bit to late for White Boy Wasted, a young local band from Eindhoven that got the chance to open this years edition of the DMF.

The first band I could witness was Vuur, the new band of singer Anneke van Giersbergen. The band is working right now on the debut which will be released via InsideOut on October 20th,2017 and after having heard the first single release “Days Go By – London” there was some curiosity when it comes to songs and live performance. Vuur are no rookies. There is a lot of experience in this band and therefore the show was done in a perfect balance between passion for the new and professionalism on the other hand. It was amazing how good the five-piece performed when it comes to tightness and harmony, esp. knowing that they haven’t had too many live shows together to date. Vuur created more appetite for the upcoming album and the long queue during the signing session showed clearly the status of Anneke van Giersbergen and band. Next to the two Dutch bands at the top of the batting order the DMF 17 was characterized by thrash metal; oldschool thrash metal to be precise. The billing included bands such as Testament, with New York City based Toxik being the first one to enter the stage. The band, that had two great releases at the end of the eighties, is back with full force. Josh Christian and band mates have been the first highlight that day. Going through material of the old days, but also songs from the recent EP "Breaking Class" created some first circle pits and it felt like Holland was intensively waiting for Toxik to return to Eindhoven RockCity. The four-piece band played an excellent show featuring furious guitar solos by main man Josh Christian. These guys are hungry and so are the fans. 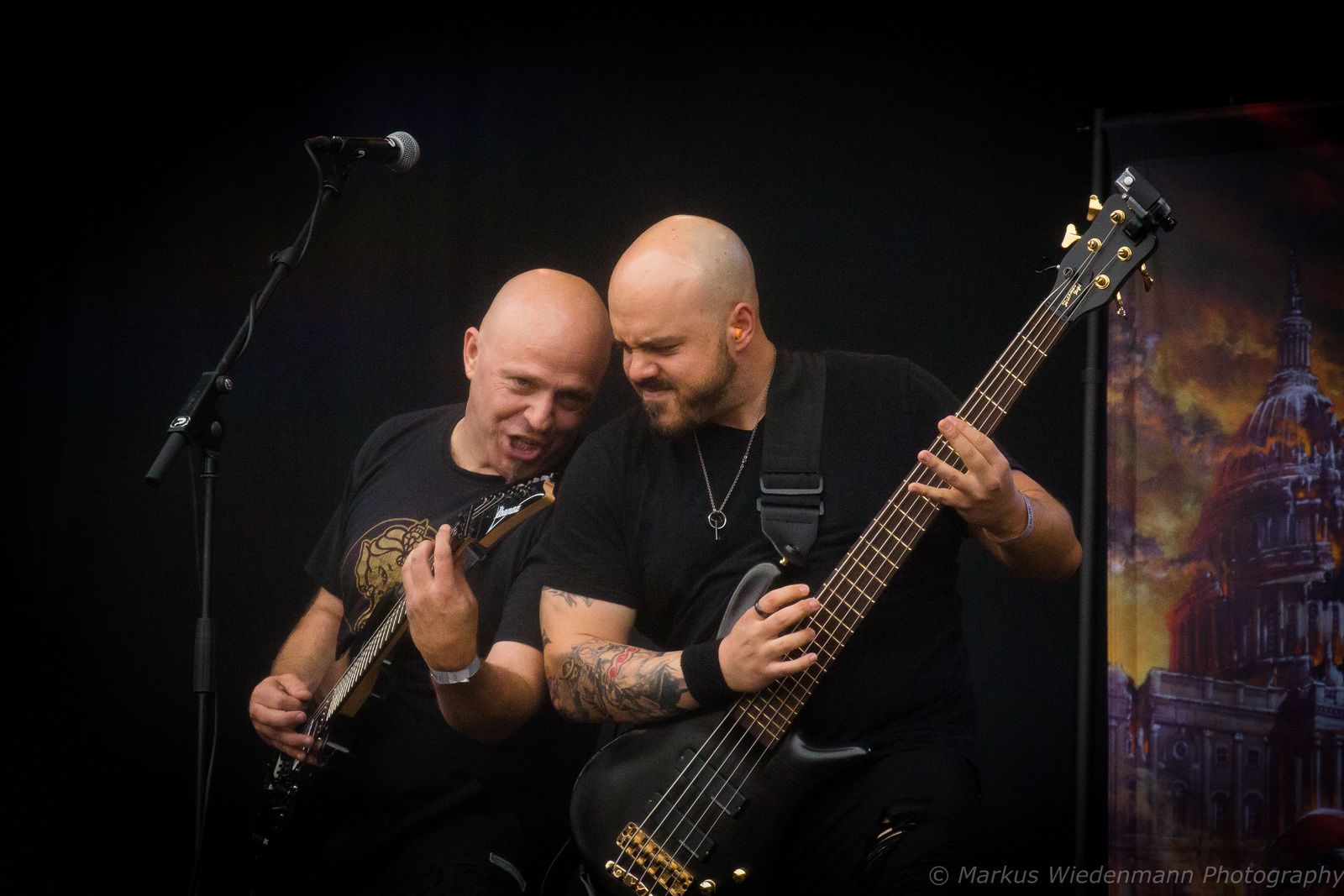 Let’s stay for another 50 minutes at the American East Coast. After Toxik created a lot of excitement it was up to New York City-based Prong to take things to a next level - and they did. Tommy Victor and Co. built the setlist around classics with only one new tune from the next album played that day (“Divide and Conquer”). The rest of the setlist was a kind of ‘Best of…', including anthems such as “Beg to Differ” and “Broken Peace”.  Prong set down an energetic show that was very well received by the crowd. The wall of sound these guys build as trio continuously astonishes me. Prong on stage is always an experience you shouldn't miss and today was for sure no exception. 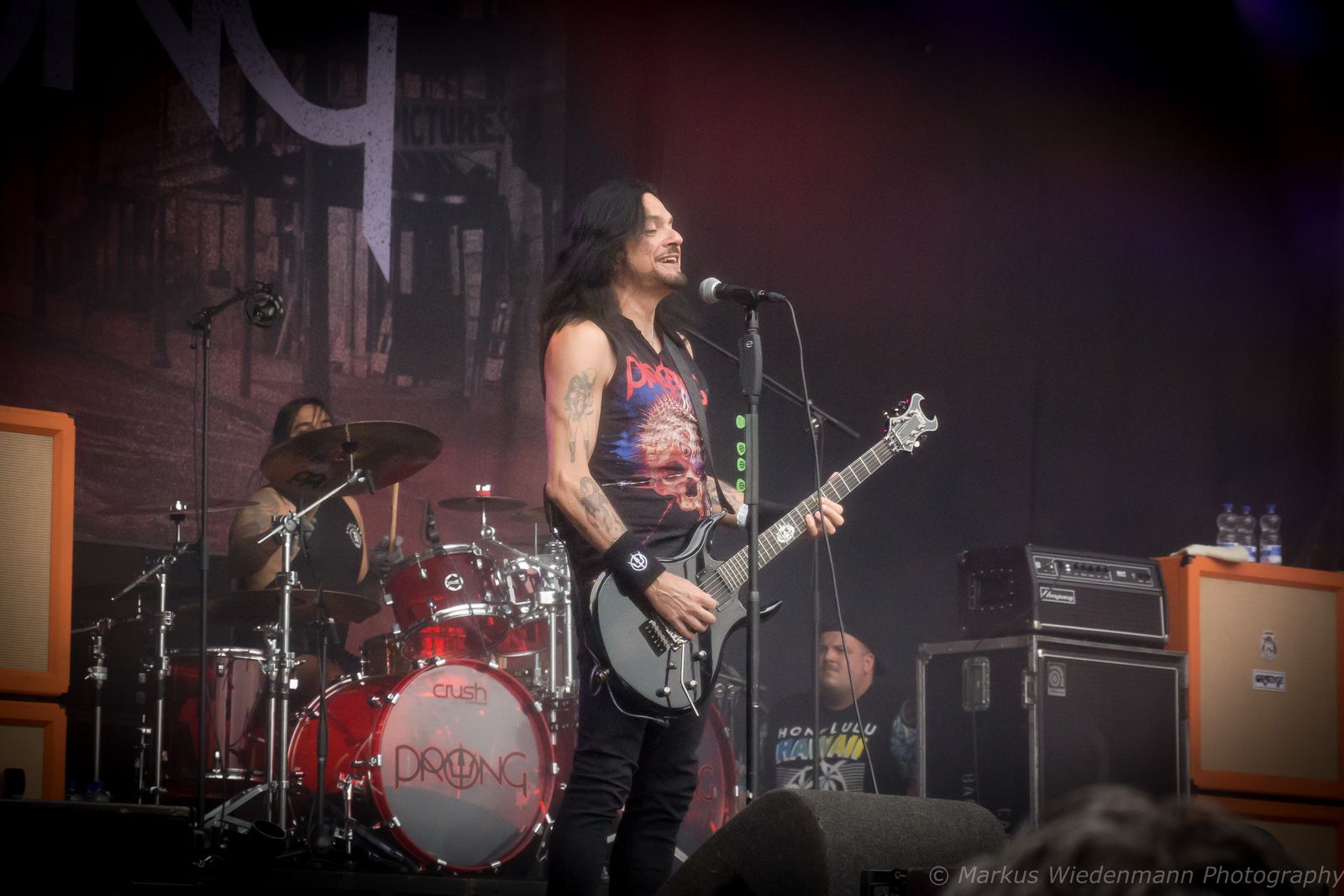 What we haven't heard so far was some death metal. Last year it was Swedish At The Gates that brought some growls to Eindhoven and this year it's their compatriots Entombed A.D. that nailed down a harsh and brutal show. After a quite long intro the quintet acted as a sonic wrecking ball. These five guys fired on all cylinders, leading to a lot of movement in the crowd. The beauty with the DMF is the billing. There is always some variety in the billing by still following a certain pattern of metal. Death metal, thrash metal and some more complex metal get together in a perfect manner; all combined to a running order that keeps the thrill alive. Dutch metal fans have enjoyed the ‘Vikings’ and therefore it wasn't very surprising that Entombed A.D. extended their show with a few minutes. Allt brå. As earlier mentioned, it was thrash metal that got a bit more attention this year. Exodus came to Holland, having a setlist in their bag that lead to pure excitement. Exodus is pure thrash metal without any frills or decoration. These guys don’t take any prisoners; they’re burning down the house. Also the five-piece from the Bay Area kept their set more oldschool with songs like “Piranha” and ”The Toxic Waltz” acting has highly appreciated icons, not to forget “Bonded By Blood”. As quite some other bands also Exodus has a long connection to Eindhoven and the Dynamo with having played their first show in Brabant 29 years ago and over all these years the quintet could keep the spirit alive. These guys are authentic, real, and heavy, being fully charged with metal energy that made Steve Souza already watch the shows of Toxik and Prong. Exodus was the real highlight on this year’s DFM and a true winner. 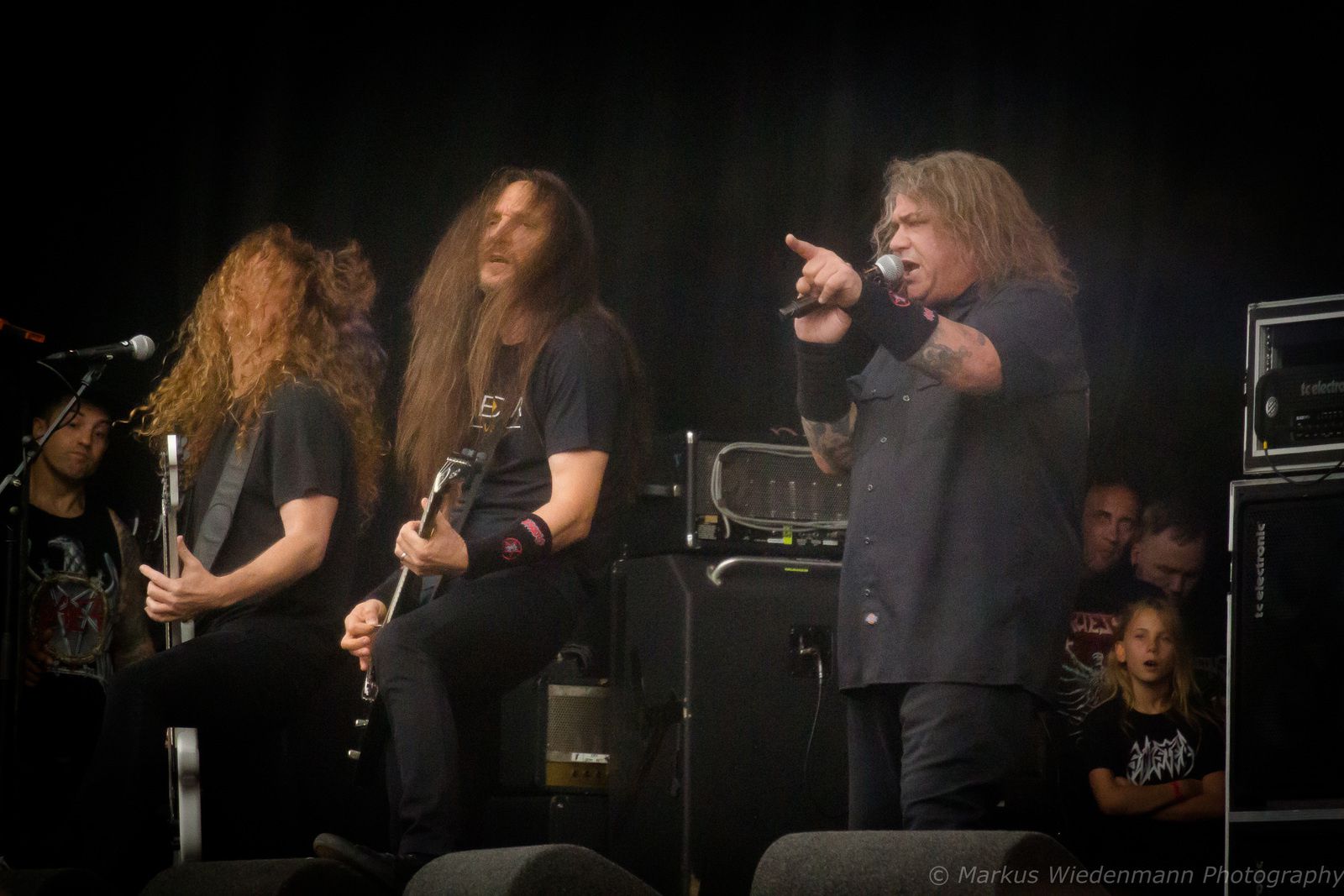 Time for some more craziness? Of course. Devin Townsend stopped with his Devin Townsend Project at this year's DMF and spiced-up the metal feast at the ‘Ijsbaan’. The Canadian guitar wizard is a great entertainer with excellent guitar skills and a full bag of enthusiasm. The crowd might got a bit tired after already 6 hours of great metal, but Townsend would not be Townsend if he couldn’t gain the fans' attention in a minute. There's no way to escape from the energy that seems to be endless with Townsend. In addition it was a smart move to use the opportunity to also perform quite some songs together with Anneke van Giersbergen. It’s the beauty of a festival that these things can be more easily arranged than normal and metalheads in Eindhoven appreciated these 60 minutes a lot. The Devin Townsend Project music added another flavor to the DMF, leading to a big cheer for the British Columbia-based musician and his hard working band mates. One of the bands many fans came for was Bay Area thrash legend Testament. The band was already announced during last year’s edition and the fact that they had their first show outside America at the Dynamo festival 30 years ago was a promising fact for a great show. Unfortunately things went slightly different. Changing the scenery on stage normally took between20 to 30 minutes, but after 45 minutes there was still no Testament on stage. In place of the band the stage crew did one microphone check after the other and you could sense already that there’s something going wrong. I think it would have been good, if someone had informed the patiently waiting crowd about what’s the situation. Finally, after one hour waiting time the band entered the stage with “Over the Wall”. In a split second everybody forgot the long wait since an oldschool set seemed to compensate for the late start. However, due to the technical problems the band lost half of their playing time. The planned schedule ruled with Testament finishing their gig after 30 minutes with “Disciples of the Watch”. Based on whatever reason, the show was good, but the missed playing time, a non-appearance at the scheduled signing session and no merchandise left a bit of a sour taste with fans discussing it even on their way home. After this stroke of fate quite some fans decided to start their way home. They missed though a brilliant show of French metal passionitas Gojira. The quartet could make use of a full light show and what you got to see was impressive. Light, smoke fountains and fire - all part of the show and used as a completion to their great music. This show was treat that for eyes and ears. I have to admit that I haven’t seen the band on stage till yesterday, but what I saw was a jaw-dropping good metal show of a band that had the best sound of the day. The setlist gave a good overview over all phases of the band's creation with a focus on the latest album “Magma”. Gojira is definitely a big player these days and the right headliner for the 2017 DMF. The quartet was the anticipated grand finale, rounding off an exciting metal day with a lot of good stuff and a downer.

This years DMF was the third edition and it was with 10,000 fans the biggest one to date. In general things have been arranged in a good way with some bottlenecks when it comes to the bar and the return of DMF coins. Prices for drinks and food have been fair even though the food offer could be bit wider next year with an also slightly increased quality. The burgers were really poor.

However, there are always things that can be improved and the mentioned will not take away a very positive impression of the DMF with the next year version being in the planning phase already. There’s a first act announced. Canadian metal icon Annihilator will come to Eindhoven and if I could have a wish the DMF team should continue with Canada by also bringing Voivod to Brabant. Let’s hope and see (or address it on the DMF FB site if you think the same). For some more Photos done by Paul Verhagen click HERE