(7/10) Sanguine are from Exeter, UK and the band's passion is modern metal. The guys started around 2004 and after some demos the debut is locked and loaded.

"Black Sheep" stands for modern metal that reminded me to Italian Lacuna Coil. Heavy guitar riffs, melodic female vocals with some additional male screams and a grooving songstructure are the red thread throughout this longplayer.

The whole thing doesn't sound bad, but it's also not really a new sound we get from the quartet. However, it's the unleashed power that is the benefit of this release.

The wildest tune on the album is "Social Decay". It's an angry number build on a heavy modern riff that is pretty cool. And it's a song that brings singer Tarin to her limits, and maybe even beyond. Her sreams are almost like the ones from The Great KAT (if you still can remember her) and I think it's a bit overdone. There are better moments on the album even though I like the raw punky energy of this highspeed tune.

Cool rockin' songs on "Black Sheep" are "Empty" that combines wildness with catchy melodies and the weird grooving "Save Me".

But Tarin Kerrey is far better when she's singing. The ballad "The Blue" fits far better to her voice and it's interesting enough that the band put two more silent tracks at the end. The closer "Whole World" is another ballad. A bit more powerful than "The Blue" but still a ballad.

The sound of "Black Sheep" is dynamic and forceful, but drums and bass sometimes come across too undifferenciated.

To sum up: Sanguine's new album is solid and energetic. Fans of female fronted modern metal can check out this album. 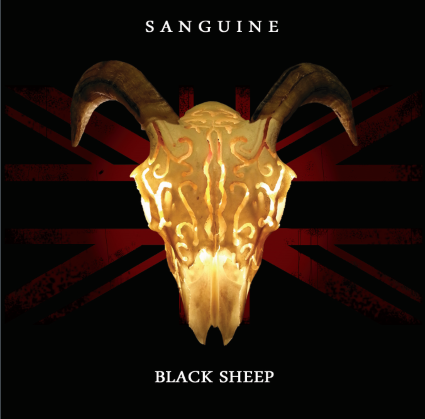