(8/10) Bliksem is the Dutch word for lighting. And this is how it feels when you hear the new album of the Belgium powerhouse. It feels like being struck by lightning. The metal firework, burned down by the guys from Antwerp, is pretty loud and forceful.

"Gruesome masterpiece" is the second full-length release from the five-piece. It follows the 2013 debut called "Face the evil" and is full of aggressive, diverse and dark metal tunes - all somewhere between power- and thrash metal. I honestly haven't paid too much attention to the debut. The more I was impressed by their second release.

The intro to first song "Crawling in dirt" sounds a bit like the one of the US serie "Hell on wheels". But after one minute a break marks the 'real' beginning of a powerful metal song that is pure food for headbanging. Singer Peggy Meeussem screams her mind to the heavens and the riffs of Jeroen de Vries and Toon Huet are wild and face-smashing.

Another cool track is the slow "Room without a view". It's a very rhythm-based tune that slowly creeps into your brain. It has a frightening vibe and is a hightlight on "Gruesome masterpiece". It actually is a 'gruesome masterpiece'.

But next to brutal thrashers like "Kywas" and "Twist the knife" there are the slow and melancholic tracks too. "Morphine dreams" is one of them. Here we are talking about a nine minutes long sonic steamroller that can't be stopped.

The debut got already some positive feedback and the same will happen for "Gruesome masterpiece" - I'm sure. Bliksem delivered a dynamic metal record that lives from the energy and the vocals from Meeussen. These guys have some potential. 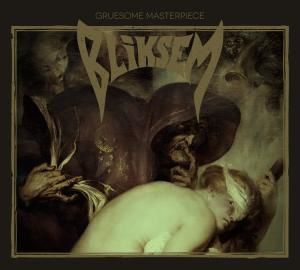