(5/10) OMG. This disc really feels like a curveball. For sure it isn't easy to say something about the new shooting starts from Japan. Maybe they aren't that popular in Europe and North America yet, but the three girls created a big hype in their home country already.

I have listened to the album a couple of times and I still don't know what I should think about it. So far, metal from Japan, for me, was closely connected to bands like Loudness. But this was the past and Babymetal is the here and now.

Babymetal feels like a mixture of heavy metal and the manga hype. What makes really fun with the album are the sometimes heavy riffs that remind to thrash bands like Pantera and the early Metallica. If you listen to "Gimme chocolate!!" you immediately understand what I mean. So far so good.

Now comes the 'BUT'. Babymetal, what a name, mixes these might riffs with techno, J-pop and squeaking vocals. This feels, let's say it nicely, as something totally new. This combination of styles made the band being the support act for Lady Gaga as well as performing at the Sonicsphere.

I have a lot of respect for trying out new things. This means development which preempt stagnation in music and art. Bands like Babymetal keep the scene vital and the controversity is good.

This doesn't necessarily mean that you have to like the result of this. I think that Babymetal is a nice 'ricochet' for the metal community and the three girls should enjoy their moment of fame. I can't imagine that they accompany us for a longer period and for this shorter moment of time we should turn a blind eye/ear to "Babymetal". 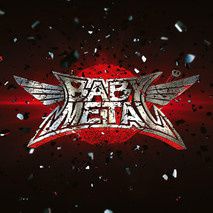