(8/10) It was 20 years ago when Arena released their debut album called "Songs from the lions cage". The line-up went through some changes in all these years but there are two guys that kept the fire burning. Founding members Mick Poiter on drums and keyboarder Clive Nolan are the main pillars of the band that is also including Paul Manzi (v), Kylan Amos (b) and John Mitchell (g); last mentioned one already part of Arena since 1997.

A dramatic classical introduction is the start of the new album from Arena. What follows is a mighty riff and guitar part that I haven't expected. The five-piece became more heavy on the latest releases but I was blown away when I heard the opener the first time. "The demon strikes" convinces with a heavy guitar sound, esp. in the chorus while the verse is kept more silent. This song is for sure a demon. "Time runs out" belongs to those harder songs as well. Not as heavy as the opener, but still hard rocking, the tune makes fun to listen to. It is full of variations and turns that makes it to a great listening experience.

When it comes to the softer tunes I would like to mention "Unexpected dawn". It's an soulful track that carries a lot of emotions; performed in an excellent way.

A song I like as well is "The bishop of Lufford". It has a kind of dark vibe created many by the verse. This is really musical storytelling on a high level.

Talking about the story; "The unquiet sky" is another concept album from Arena. This time it uses the short horror story of M.R. James called "Casting the ruins".

Arena never released a disappointing album and also "The unquiet sky" doesn't break with this rule. Twelve great prog rock songs with many twists and turns will give you a good time. I like their album and fans of bands like Marillion, Magnum and Threshold should check "The unquiet sky". 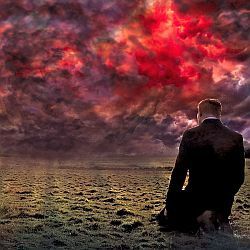