New album from BONFIRE in April

The history from Bonfire started many many years ago. It was in the beginning of the 80's when a bunch of young guys teamed up under the banner of Cacumen. This happened in Ingolstadt, Germany. The city was and isn't well known for rock music, but Cacumen managed to get some first sttention by realeasing the debut in 1981 and "Bad widow" in 1983.

The two main names behind Cacumen have been Claus Lessmann and Hans Ziller. It has been those two guys who decided later to change the name into Bonfire. The first album of the new established group was "Don't touch the light" in 1986. The longplayer made the band even more popular and songs like "SDI" or the title track  became well known hardrock anthems. With "You make me feel" the band had even a first small hit on "Don't touch the light".

With the increasing popularity Bonfire also got the chance for better condition when it comes to production and touring. The peak of the band from Ingolstadt was in 1987 when they released "Fireworks" - an album that entered the German charts and enabled them to tour with Judas Priest and also ZZ Top.

Bonfire could never return to those successful times due to internal differences and line-up changes. Of course more records have been released but none of them was as good as "Fireworks" and the debut.

A big credit of the band is that they never gave up. Bonfire always existed and after all these years they have a new album that will be released pretty soon. Hans Ziller teamed-up with singer David Reece which seems to be a very good combination. Having Ronnie Parkes on bass and Harry Reischmann behind the drum kit Bonfire's newest release will be titled "Glorious". Release date will be end of April and let's stay curious about how it will sound. Stay tuned. 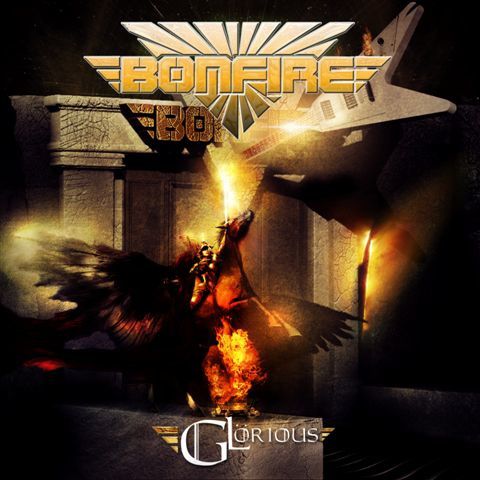