(*/10) It’s always a good signal if a band is many many years in business. And it’s also a good thing to celebrate certain anniversaries. German metal enthusiasts from Gamma Ray are around since 25 years and it feels like yesterday when I heard their debut “Heading for tomorrow”.

As being a Helloween fan from the early days it was a sad moment when the announcement was revealed that Kai Hansen will leave the band. But the tears dried quite fast when I heard the first songs from the guitar maniac from Hamburg which he released together with his new band Gamma Ray. The debut “Heading for tomorrow” was and is still a masterpiece of metal; enriched by the vocals of Ralf Scheepers (Primal Fear) in those early days.

To celebrate the bands 25th anniversary Gamma Ray will release a “Best off…” album that contains 25 songs. All of them are hand-picked by Kai Hansen and reflect all eras of the band.  The first single “Heaven can wait” is on the album as well as the Priest-like “Hellbent” from the 2014 release “Empire of the undead”.

There are not that many extras coming with the album. All songs have been re-mastered by Eike Freese and Hansen added some liner notes too. That’s it.

But you can look forward to some bonus material and extensive booklets, since all Gamma Ray records will be re-released during 2015 containing the mentioned benefits. So it will be a lot of Gamma Ray during the year.

However, the “Best of…” album gives value for money and is a great retrospective on the discography of the Hamburger Jungs. And IF someone doesn’t know the band so far, it is a great first touchpoint with the four-piece group. 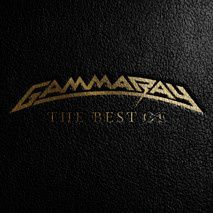