(9/10) Edguy is Tobi Sammet. I think the band couldn't exist without this man. And Sammet has the gift of almost unlimited energy and (self-) marketing. And he has the pleasure to work together with experienced and capable musicians which create the stage for the entertainer from Fulda, Germany.  This mix is an important factor behind the success of the passionated band. The story started in 1992 and lead to a debut album called "Savage poetry" in 1995. No easy times for a metal band since Grunge was on it's peak and metal bands  have searched for their identity. Edguy managed this in an excellent way and started their trip to success.
The next stop on this trip is their new record "Space police - defenders of the crown". It's the 11th album and another milestone for Edguy.
The first thing, which is remarkable is the cover of the from Sascha Paeth produced album. It's always surprising with what things the band/Sammet gets along with. I think that such a cover would have lead toa thunderstorm of  critics since it looks, let's say 'special'. But in one or another way it fits to the music of the five Germans.
"England" is Sammet 'declaration of love' for the country. Like in most of the tracks Sammet has always a waggish sense of humour, which is reflected in the lyrics. With "Rock me Amadeus" the album even contains a cover version of the Falco hit with the same name. That was rave, but it sounds good. "Aychim in hysteria" could have been also from Def Leppard - what a surprise while looking on the name. Than there also the power metal tunes like the opener "Sabre & torch". The song, with it's pure power, is a great energizer and a good choice for kicking off the album. But there are also 'party tracks' on the record. One example is the catchy "Love tyger". Compared to the heavy opener this tune is almost swinging and has an extraordinary hookline. I don't want to really say that, but it has a touch of Poison. And with "The eternal wayfarer", an almost 9 minutes long epos full if catchy melodies and powerful riffs, the band underlines that also the mighty Led Zeppelin are not totally unknown  in the Edguy camp.
Conclusion: "Space police - the defenders if the crown" became the expected awesome Edguy album. It strengthens the bands position in the German metal scene and let's hope that Sammet's flow of creative energy will continue.
(9/10)
Tracklist
Label: Nuclear Blast
Genre: Heavy Metal 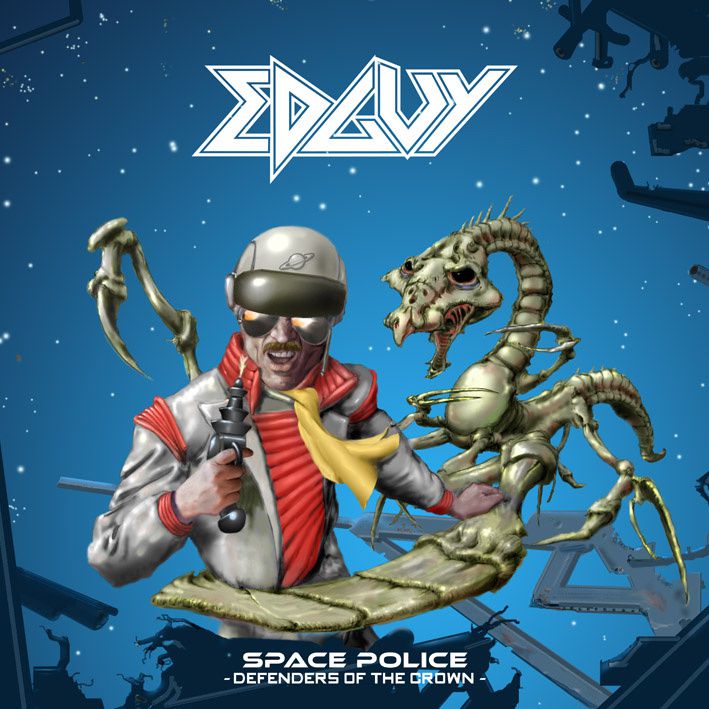