(7/10) Early in the morning after a short night. Can you imagine this situation? You have a big need for some coffee in order to get some energy into your body. I have another option for you. Gunpowder Gray. They pump adrenaline into your body.

Honestly I never heard about them earlier. When I got the CD I wasn't expecting a lot. This changed immediately after I have heard the first notes. Gunpowder Gray is mainly Nate Godbee (v) and Adam Besserer (g). Both normally play in the Atlanta based death metal band Disfigurement. But obviously they have also a passion for bluesy sleaze rock, since Gunpowder Gray plays exactly this kind of music. The two guys paired with three local musicians and worked on the debut album (with 7 songs proabably more an EP than a full-length record).

The songs are amazing. The band mentions in the info sheet Black Sabbath and Pentagram as their inspiration, but the result sounds more like straight forward energetic sleaze rock / hardrock. The vocal remind very much to Axl Rose in the early days. But it is not only a copy of Guns'n'Roses, since the album comes also with the simplicity and power of punk rock. A bit like the last releases of Skid Row. This combination makes the songs sound really cool. Almost half an hour of hardrock without compromisses and with a lot of street credibility is what to expect from "Gunpowder Gray".  To highlight certain tracks would not be fair since they are all good. But if I have to chose one or two highlights I would say: listen to the opener "Gunpowder gray"  and the fast and furious "Cut me out" - or grooving "Saints".

If you always waited for a good successor of Guns'n'Roses "Appetite for destruction" - here it is. Enjoy the party. 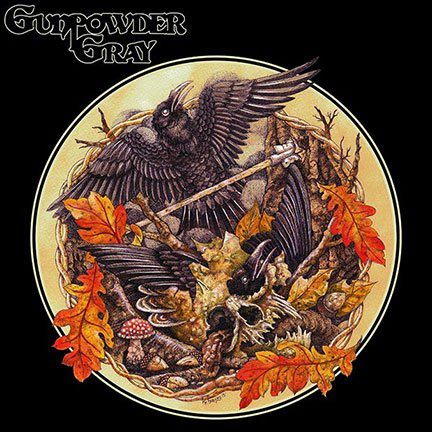