A rainy, grey and cold November evening in Amsterdam. So a good day for having a hot rock show. That was almost the scenario on November 19th when Ugly Kid Joe and Skid Row played at the Melkweg in Holland’s biggest city. As opener “Dead City Ruins” joined the package. Since I haven’t seen their show (just heard positive comments) I can’t say a lot about them.

But I can say much more about Ugly Kid Joe. After a long intro, which was a kind of rap/hip-hop song the band entered the stage around 20:00. The sound was very good from the beginning, but there was a kind of distance between band and audience during the first song. I think that a lot of people didn’t know what to expect from the band after all those years of absence. But already with the second song the ice was broken and a good rock’n’roll party started. The setlist contained newer material like “Devil’s paradise” from the latest EP, but also the hits like “Neighbors” and of course “Cats in the cradle”.

After finishing the “Goddamn devil” the band showed their humor. Whitfield asked the audience to just imagine that the band has left now the stage. But instead of leaving the stage all band members stood still – as a statue. The band kept their postures for quite some minutes and after a few moment of surprise the crowd demanded an encore. And of course the band appreciated that and played two more songs. The first one was “Everything about you”. The final song was a Motörhead cover – “Ace of spades”. The crowd got really wild and celebrated Ugly Kid Joe. After that show we can say that they are back in business – which is very good news.

After a 30 minutes break Skid Row started their gig. Since Ugly Kid Joe played a real good show it was difficult for Skid Row to top this. But they managed. Actually it was a fantastic show. Also they combined new stuff like "King of demolition" with the older highlights in the bands history like “18 and life”, “Youth gone wild” and “Slave to the grind”. Skid Row had as well a cover song in their setlist. It was “Psycho therapy” from the Ramones, which was sung by Rachel Bolan. He actually did a very good job here. But I also want to mention that all band members played a fantastic show. Johnny’s voice and personality fits perfect into the band, Dave and Scott played excellent and their stage acting was great. Last but not least Rob’s drumming gave the whole band the drive and foundation which was needed. They obviously had fun and enjoyed playing together. This was also expressed by Dave Sabo who was really touched by having that strong support from the fans. Guys, you're welcome…

Skid Row was standing on stage as one unit and created an awesome vibe. They rocked the Melkweg and the around 300 visitors couldn’t get enough. I can see from time to time the discussions about having a reunion with Sebastian Bach. Nothing against Sebastian, but I have to ask: “Why?”. After I have seen the show I think, that the band has to continue in this line-up. Again, they are one unit, they are good and they rock. My only wish is: Keep on rockin'. Hope to see you guy back soon.

So all in all it was an excellent way to spend a grey, rainy Tuesday evening with great bands which played a fantastic show and rocked the Melkweg. More of this. This is rock’n’roll.

By the way, there are still some shows to come. If you have a chance – go there: 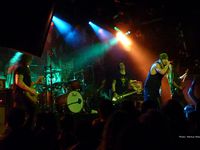 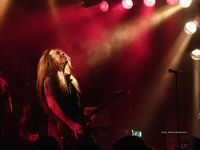